Home Culture Feature The many branches of the K-State family

What defines a university? Is it being able to have the option of taking one of more than 250 available majors and options in nine different colleges? Does being recognized as one of the best universities in the U.S. by Forbes magazine, The Princeton Review and U.S. News and World Report make a university great? What about having students from all 50 states and more than 100 countries on campus … is that what makes a university?

Maybe what makes a university great is having more than 90 research centers and more than 200 patents. Ask one of more than 200,000 alumni who call K-State their alma mater and most likely the one word that will come to mind above everything else is family.

Trent Hagenau, junior in communication studies, has three generations of K-State pride in his family. His granddad graduated from K-State with a bachelor’s in computer engineering, and his mother studied life sciences for two years. Hagenau, from Omaha, Nebraska, didn’t let the distance or the out-of-state tuition stop him from attending K-State.

“I loved Manhattan back then, so it just kind of came natural to choose K-State over Nebraska or Iowa,” Hagenau said.

His family visited Manhattan many times when he was young, and he was familiar with the area long before he ever decided to pursue his degree. While K-State’s history was passed down from different generations, it was the people in Manhattan that helped Hagenau decide this was the university for him.

“I really like how closely knit the university and the city are,” Hagenau said. “Everywhere you go in Manhattan, people are wearing purple and everybody here loves K-State.”

Hagenau said that everyone here is so friendly, from the students to professors.

“If you need help finding your way around, there’s people always going to be willing to help you out and point you in the right direction,” Hagenau said.

K-State alumna Michelle Ptak attended K-State from 1981-1985 and graduated with a bachelor of science in accounting. Her daughter, Jessica Ptak, senior in nutrition and health, and son, Joey Ptak, sophomore in professional construction science and management, followed in the footsteps of their mother. Michelle’s grandfather, John Nation, attended K-State in the late 1930s and early 1940s, and her parents, Nancy and Mickie Heinz, later attended in the late 1950s and early 1960s.

“I came up for a couple campus visits with friends and loved the beautiful campus, friendly people and great social life,” Michelle said.

Basketball games in Ahearn Field House hold a special place in Michelle’s heart because her dad was on the basketball team when he attended K-State and died while she was in high school.

“Ahearn was so loud,” Michelle said. “I can remember walking home from games with my ears ringing and hoarse from cheering.”

Her favorite part of attending K-State, however, are the friends she made while she was a student. She continues to keep in touch with the girls from her Gamma Phi Beta pledge class and even comes back to Manhattan to meet at Kite’s Grille and Bar at least once a year. She also has season football tickets with her husband, Brian and her college roommate, Tisha Piper Petitjean and her husband. She comes back for all of the home games and returns to Manhattan for Moms’ and Dads’ weekend for her kids’ sorority and fraternity events.

“We usually have to stay at my daughter’s apartment since hotel rooms are so scarce around here now,” Michelle said.

Although Manhattan has grown, she said the city still has the same friendly feel like it did when she went to school here.

“There is something about crossing the bridge and driving into downtown,” Michelle said. “I take a deep breath and think, ‘Ahh Manhappiness – I am home.'”

Rae and Bill Stamey currently reside in Meadowlark Hills Retirement Community, but their roots to Manhattan began in 1953 when Bill took a job at K-State. Rae and Bill met during World War II on a double, blind date and were married three months later because he got his orders to go overseas. Bill got his Ph.D. in 1952 from the University of Missouri and began to look for a job afterwards. Rae knew she wanted to settle down, and having Bill work as a professor would provide the most stability for their children, whose oldest son was just starting kindergarten at the time.

“Finally one night I thought, he’s always wanted to be a teacher, so I told him the next morning, ‘Why don’t we just stay in the academic world and we’ll have more control over our lives,’ and I could just see the relief come over his face,” Rae said.

Bill already knew some of the faculty working in the math department at K-State and didn’t even have an interview before being hired as one of the math professors. He worked as a math professor for five years. He later became the Dean of Arts and Sciences.

In the time that Bill was the Dean, their three children attended K-State. Their oldest son’s three boys were also students at K-State. The Stamey’s were very social and interactive with other faculty members. Bill played golf with 1950 President James McCain, and his wife, Rae and Janet McCain were close friends and enjoyed many of the same things.

“The department needed to meet those three people, and see which one they liked or something,” Rae said. “It was just way to get together, so that’s why I started it.”

Rae’s social planning skills were put to the test when trying to come up with new and inventive themes for her social gatherings she held with the different departments. She used rain boots that doubled as centerpieces, drilled holes through pineapples to look like palm trees and even decorated tables with seashells. Rae would have up to 60 people at many of her social gatherings. Her favorite part about getting all the faculty members together was simply getting to know everyone.

It never occurred to her that she wouldn’t throw these events because she wanted to get people better acquainted.

“We didn’t have all the restaurants and party places like we do now, so that’s one reason I did it at home all through the 70s and 80s,” Rae said.

She eventually had to stop holding the gatherings at her home when her parents moved in with her and Bill. They lived with them for five years. The Stamey’s home had two large living rooms on both floors, and with her parents living on one of them, she had much less room to work with to plan social gatherings.

“We just thought it was important,” Rae said. “I enjoyed it. I wouldn’t do it if I hadn’t. I didn’t realize I was enjoying it so much.”

Friends, community and family are all things Wildcats leave Manhattan and K-State with that no one bothered to mention on their diplomas. 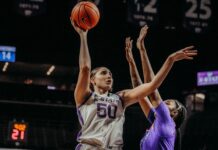