Former U.S. Sen. Nancy Kassebaum Baker will receive an honorary doctorate from K-State. According to K-State News and Communications Services, Kassebaum will be recognized at the Graduate School’s commencement ceremony on May 15 at 1 p.m.

“Nancy Kassebaum Baker’s nearly two decades of leadership as a U.S. senator are evidence of her dedication to service and diplomacy,” Kirk Schulz, university president, said in the news release. “We want to honor her distinguished career. Through scholarships and the Landon Lecture Series, Kassebaum Baker and her family have maintained strong ties with Kansas State University. Their support, leadership and example of service play an essential role in helping Kansas State University become a Top 50 public research university by 2025.”

An honorary doctorate is one of the highest honors K-State can give a person, after receiving approval from the Kansas Board of Regents. K-State also offers the Kassebaum scholarship in recognition of up to five students who aspire to have careers in public service fields.

K-State’s Research Experience for Undergraduates program has received more than $312,000 worth of funding, enough to support the program for the next three years, as a part of the eighth renewal of funding for the program.

According to K-State Today, this funding will cover the training of nine students to conduct summer research at K-State for the next three years.

K-State’s Biology REU program is one of the longest-running of the programs in the nation, and has been continuously funded for the past 21 years.

“Through our REU program, students are learning from and training alongside K-State experts in the fields of ecology and evolutionary biology, and climate change,” Bruce Snyder, coordinator of K-State’s REU program, said in the news release. “They discover what it is like to do independent research and decide if research is something they want to continue beyond their bachelor’s degree.”

In its 21 years of funding, more than 200 undergraduate students have participated in the REU program.

“Our REU program has been highly successful in terms of the quality of students we attract and produce,” Ted Morgan, associate professor of biology, said in the news release. “Nearly all of the REU students go on to earn graduate degrees, several return to K-State for graduate school, and some are now in tenure track positions at universities. The program has a two decade legacy of excellence in undergraduate research training at K-State, and many of our former participants have become emerging leaders in our field.” 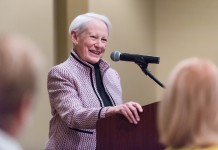