The world is run by technology. College students use the Internet to communicate through email, take online tests and quizzes, and conduct research. To get these tasks done, it is crucial to find a great study spot with reliable Wi-Fi.

K-State currently has 2,341 wireless access points, according to Information Technology Assistance Center Director Rebecca Gould. While this may seem like enough to cover campus’ 556 acres, some students think there should be more.

“I would say my Wi-Fi at home works a lot better than on campus,” Jenae Hicklin, junior in general and human resource management, said. “There are also only four people using our Wi-Fi, (as opposed) to all students on campus at one time.”

Not only are there approximately 23,000 students using electronics on campus, but Gould said that the average K-Stater brings around three electronic devices to campus. In the past two years, the number of devices used on campus has more than doubled. She said along with the growing population at K-State, however, the amount of access points has increased too.

Yet several students still don’t feel like this is enough.

Hicklin said that she only goes on campus for group projects or in between classes, though that it is only partly because of the Wi-Fi and also so that she has all her materials readily available in one place. She said there was a time where she had to redo an entire application because the Wi-Fi went down on campus.

“I learned from this experience and now am sure to do things like that where there is more reliable Wi-Fi,” Hicklin said.

Caleb Howser, junior in construction science, also said his house’s Wi-Fi is more reliable and that he has not been able to submit assignments on campus in the past because the Wi-Fi has crashed.

“I think Kansas State could set up more router points in order to improve the connection,” Howser said. “I don’t go to campus anymore to study, because it seems that I usually have an issue with the Wi-Fi.”

K-State Wi-Fi is good, but not as reliable as it should be. In a technology infused world, along with more and more classwork online, students have the right to not worry if the Wi-Fi will work on campus that day. 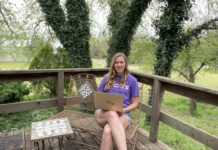