Another day, another struggle. Second verse, same as the first.

That was the second day of the 2015 Big 12 Men’s Golf Championship in Tulsa, Oklahoma, for the K-State men’s golf team.

The Wildcats were unable to make a move up the leaderboard Tuesday and remain in ninth place after shooting a third round team score of 29-over par 309. That brings the total team score of the tournament to 73-over par 913.

Texas continues to lead the total team score at nine-over par 849. Three Longhorns lead the individual competition, with Scottie Scheffler, Gavin Hall and Doug Ghim battling it out for the top spot.

“Today was a struggle,” head coach Grant Robbins said to K-State Sports. “When you play a golf course like this against this type of competition, your weaknesses will be exposed and ours were today.”

Sophomore Matt Green scored a four-over par 74 in the third round, falling four spots to a tie for 19th. For the tournament thus far, Green has shot a 12-over par 222. His day on was highlighted by a lone birdie on the sixth hole.

The four remaining Wildcat golfers carded a total of just three birdies on the afternoon. Sophomore Seth Smith managed to stay in the top 40 despite not sinking a birdie for the entire round. Sophomore Connor Knabe and Freshman Trent Evans are tied for 41st, and Hank Simpson rounds out the group finishing in 44th place.

“I expect our guys to continue to battle and come ready to play tomorrow,” Robbins said.

The Wildcats begin the final day of the Big 12 Men’s Golf Championship today once again paired with Baylor and Kansas. Tee time is set for 8 a.m. at the Southern Hills Country Club in Tulsa, Oklahoma. 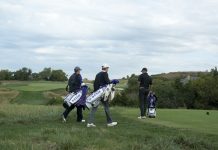