After an unsettling offensive performance Tuesday in which K-State baseball registered one hit and zero runs, the Wildcats bounced back with vengeance to record a 9-0 shutout over Minnesota Wednesday to split the two-game midweek series in Minneapolis, Minnesota.

It took a village to raise K-State’s third shutout of the season, spearheaded by junior starter Brandon Erickson. Four of the five pitchers who saw action Wednesday recorded two strikeouts or more.

“The pitching staff was the name of the game today,” K-State head coach Brad Hill told K-State Sports. “Erickson had a good bounce-back start. From there, we just continued that string of zeroes (on the scoreboard). A lot of credit goes to our pitching staff.”

K-State started the scoring off early with four runs on three hits in the first inning, including three singles, a fly out and multiple walks.

After just seven Wildcats reached base Tuesday, only one of which on a base hit, K-State was able to have at least one man on base every inning.

Finally, in the ninth inning, after the Gophers walked Wolfe, junior infielder Steve Serratore hit a two-run home run to cement the 9-0 scoreline. It was his first big fly of the season.

“(Meyer) had trouble with his command, so we got some help in the first,” Hill said. “We had some guys that did not get over-amped, with (Serratore) and the big hit keeping the rally going early in that inning. After that, it was a good job by the guys with plate discipline, not leaving the zone and making sure to get some runs up on the board.”

With the win, K-State moves to 21-23 on the season. The Wildcats’ rare midseason nonconference slate continues this weekend in Manhattan against Arkansas State beginning on Friday. 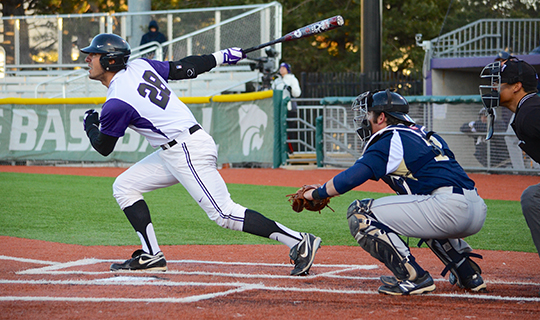