Leah Watts, senior in music education, dreams of one day teaching music to kids. As she pushes down that road, she might make a pit stop to play at Country Stampede.

Watts is a contestant of the Kicker Country Stampede Songwriter Contest, where the artist that gets the most votes on their original song will get to perform live in front of tens of thousands of people in June on the concert’s main stage.

“Through some crazy connections, I was asked to enter,” Watts said. “It kind of just fell into place.”

Watts interned in Nashville last summer for Nashville Songwriters Association International, an organization that works for songwriters’ rights in D.C. Though she did a lot of typical intern tasks like paperwork and running errands, she said it was a great opportunity to meet people.

One of the people Watts met was Ken Matthiesen, a member of the association from Manhattan who works with Country Stampede. She is currently assisting him with the concert by designing things for the performing artists and by helping out during the event itself.

After their connection in Nashville, she said Matthiesen persuaded her to enter the songwriting contest.

“I’ve had a lot of support since I started and I’m so lucky to have those people in my life to push and support me,” Watts said.

“My parents always said I could sing before I could talk,” Watts said.

According to Watts, her mother is one of her biggest inspirations and best friends that is always honest in telling Watts if she isn’t making smart choices.

She said they always attend recording session together and her mom is right by her side, informing her of what sounds good and what doesn’t.

A recent recording session of a song Watts wrote while in Nashville this past summer led to a single that was released on iTunes on April 26, titled, “Million Tiny Little Things.”

Watts said she fell in love with the song once she wrote it. Though the song is very personal, it’s also something she said everyone can relate to – especially girls.

According to Watts, the song is about the “tiny things” girls fall in love with when they’re in love – whether it’s holding hands or kisses on the forehead.

“The one thing I’m extremely proud of in life is that song,” Watts said.

Looking forward, Watts said her dream is to inspire others with her music, whether it be through songwriting or teaching and working with kids.

With a motto of “be fearless and just do it,” Watts is having fun with all the opportunities coming her way. Bryan Pinkall, assistant professor of music, said Watts accomplishes so much because she is unafraid of failure.

“It can be difficult to live the life of a professional musician,” Pinkall said. “And where the stress and rejection may keep some people down, Leah loves the challenge and is exceedingly creative.”

Pinkall said he believes the opportunity to perform at Country Stampede is just the beginning for Watts.

“One step at a time, she will keep reinventing herself and her music, and that will lead to bigger and better opportunities for her career,” Pinkall said.

Katie Omo, senior in music education, has been friends with Watts since their freshman year and said this is just another mile marker on Watts’ journey.

Omo describes Watts as ambitious, passionate and “as warmhearted as they come.” According to her, winning this competition would only fuel Watts’ determination to pursue her dreams.

“I can’t think of a more deserving and talented person to win this contest,” Omo said. “Leah is such a star and the world needs to hear her.”

Voting for the first round of 2015 Country Stampede’s Songwriters Contest is currently open for Watts’ group and will close May 10. The top two artists in her voting group will move on to round two. Anyone can vote on the Country Stampede website by clicking on “Songwriters’ Contest” in the dropdown menu under “2015 Lineup.” 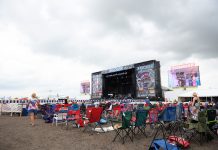 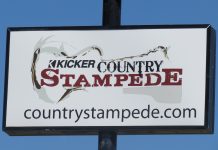 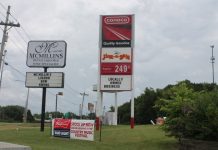