In the memory of more than 5,800 deceased and countless more injured, Nepalese nationals and Manhattan residents came together Thursday evening in a candlelight vigil held in front of the K-State Student Union to show support for the victims of Nepal earthquake.

The death toll following the earthquake, which first hit on April 25, has been rising steadily, with the victim count going well over 5,800 nearing the end of this week.

Abhishes Lamsal, Nepalese researcher and graduate student in agronomy, said that recovery from this natural disaster does not seem feasible for years to come as Nepalese people everywhere await the official aftermath census.

“The damage is not just catastrophic; it’s unimaginable,” Lamsal said. “I’m from a small town that’s about 50 km (31 miles) south of Kathmandu. Fortunately, I haven’t lost any of my family members back home but they have lost their houses and for the past few days they’ve been living out on the street in a tent.”

Lamsal said it’s a shame how a beautiful place like Nepal is now in ruins.

“I was in Nepal last summer and it was outstandingly beautiful and calm and tourists were all over; as a country that thrives on tourism, this disaster will have catastrophic repercussions on our economy,” Lamsal said.

Lamsal also mentioned the efforts being put forth to raise support for Nepal here in Manhattan.

“The Nepalese Student Association is currently running a fundraiser both online and on the K-State campus, we have collecting boxes for donations in the main offices of most departments and we started a website for those interested in giving to the Nepalese cause,” Lamsal said. “All of the funds we raise go straight to the Prime Minister Relief fund to help provide food, water, medical supplies and the like. Unfortunately for now we’re unable to receive aid in the form of canned goods or material aid because it would be too difficult to ship these over.”

Madhav Regmi, Nepalese researcher and graduate student in economics, said that with the current extent of damage he still hasn’t been able to directly contact his family members back home.

“I’m from the district of Gorkha, less than a dozen kilometers away from the epicenter,” Regmi said. “Most of the houses in my village were damaged, getting a cellular connection is near impossible, and as transportation is very difficult right now, aid is getting there much slower. I unfortunately didn’t get a chance to speak to any of my relatives yet but thanks to Facebook I was able to contact neighbors and other people who know them and I was told they’re doing alright.”

Regmi said he’s grateful for the amount of support other nations and entities are showing the Nepalese cause.

“We’ve seen amazing support, and not just from people around here, but if you look online you’ll find that whole nations are moving to support our people in this time when we most need it,” Regmi said. “I think we won’t be able to recover without such help from other nations. Support from large world powers such as the U.S. and the U.K. is very necessary as the amount of devastation could be much worse than we think.”

According to the Washington Post and BBC, the damage had also reached parts of India, China and Bangladesh and had triggered an avalanche on Mountain Everest, killing at least 18.

Matt Rogers, sophomore in anthropology and winner of the Chapman scholarship funding his trip to Nepal, said that his plans to go to Nepal this summer have not changed.

“It’s one thing to go to Nepal on a regular day, and another thing to go at a time like this after the country had been completely altered,” Rogers said. “I definitely considered postponing the trip or changing my destination, but this is a chance to learn much more than I’d expected and widen my scope by seeing how people interact with the disaster and how they cope with the change as they try to rebuild Nepal. It’s very unfortunate what happened and I really hope the death toll is lower than what Wyss predicted.”

Supporters played native Nepalese music and circled a candlelit memorial map of Nepal as they took turns to speak about the disaster. 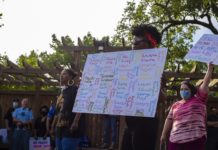 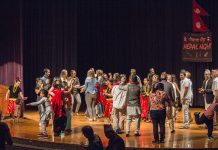 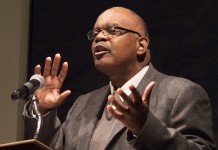