K-State’s provost and senior vice president is up to more than just matters here on campus. April Mason recently won an award that recognizes women for their exceptional contributions to their specific field and impressive leadership trajectories.

Mason said she felt deeply honored, surprised and overwhelmed to be recognized as one of four women to receive the Distinguished Women Scholars award from Purdue University.

From a young age, Mason said she had been interested in biology. This interest developed into a passion for nutrition and biology, especially during her junior high and high school years when she lived in Rome, Italy.

“Living and going to school abroad helped me as an individual to be more aware to the needs of others, and how our world is closely connected,” Mason said.

Mason said people should give thought to how their actions affect others.

“It is awfully important for us to think about our actions, pollution, water quality and food production in the context of the entire world,” Mason said.

Mason is passionate about conducting research to find more efficient ways to feed the world with healthier nutrition options.

“There will always be a need to feed people,” Mason said.

Mason said she has studied the trace minerals iron and zinc, which are important for the health of women and children. She looked at how available these minerals are from soybeans and how to process soybean products to make the minerals more available. Her research is focused more on plant products as the main staples in diets.

Ben Brown, senior in agriculture economics, is the legislative assistant at the Office of Governmental Relations. Brown’s workplace gives him the opportunity to work with Mason.

“She does a good job asking the difficult questions so that nothing is overlooked,” Brown said. “She works hard to secure the level of integrity and prestige with academic standing at K-State.”

As the provost, Mason said she loves working with the faculty and students at K-State. Cody Kennedy, senior in education and mathematics, has worked alongside Mason over the past year as the former student body vice president.

“She has encouraged me not to be afraid to ask the questions that people don’t want to ask and include everyone in the conversation because each voice is important,” Kennedy said. “I have gone to her for advice and support, and she is always willing to take the time to talk with me.”

Mason said she wants students to believe that there is no such thing as a stupid question.

“Whether you are a freshmen in college or have been teaching for 32 years, we both need to ask questions when we don’t know the answer,” Mason said.

As the provost, Mason is the Chief Academic Officer at K-State. She works with the deans of all colleges, interacts with the state level Board of Regents and communicates with the Student Governing Association.

“She brings a unique perspective that always challenged me to think outside of the box, and think how a particular decision would impact all students,” Kennedy said. “She is a driven individual that truly cares about students at K-State and wants to see them succeed.”

Mason’s duties as the senior vice president at K-State include taking on-campus responsibilities when President Schulz is off-campus, and she has had a critical role in the 2025 university plan.

“My job is rewarding because I work with people who respect each other and have common goals,” Mason said.

Those who have worked with Mason also speak respectfully of her and have noticed the work that she has put in to the administration.

“K-State has an incredible senior administration,” Brown said. “After working with Mason and observing how she works with campus leaders it is evident that she has contributed to the success of K-State.”

Mason said she credits her academic success and leadership capabilities to the thoughtful and caring faculty members she was able to learn from at Purdue University.

“I am still learning something new everyday, your mind always needs to be open to hear new ideas,” Mason said. “It is important to value learning.” 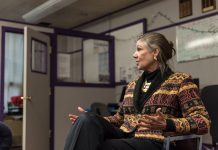 Q&A: Provost April Mason reflects on time at K-State prior to departure 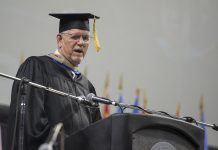 Q&A: Provost April Mason reflects on time at K-State prior to...