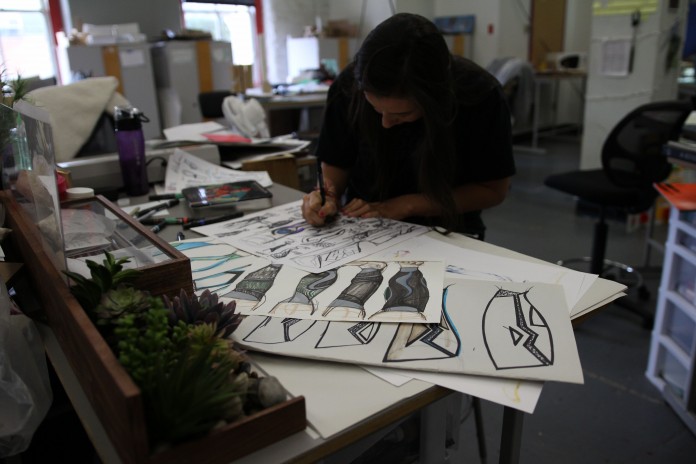 A program unlike any other in the country has 27 second-year students developing innovative products. The Interior Architecture and Product Design, or IAPD, students are working diligently for the remainder of the semester to design prosthetic skins. These prosthetic skins will be manufactured for six unique individuals with various personalities who have existing prostheses.

The prosthetic skins constructed by the IAPD students are the first skins that will be 3D printed on flexible resin, according to Dustin Headley, associate professor and facilitator of the IAPD studio. The skin will be a piece designed separately from, but with the ability to connect to, the the existing prosthetic limb.

“Prosthetic skin in general is not a new thing, but it is a very costly thing,” Headley said.

Printing the designs on a flexible resin canvas, which is essentially like silicone, will introduce this product at a fraction of the price that current skin prosthetics are produced at. The existing skins cost around $1,000, the students will hopefully produce six skins for the same amount of money.

The prosthetic skin is an extension of an empathy project the students worked on earlier in the semester. Students experienced sensory deprivation and tried to simulate loss of mobility, sight and hearing loss. The prosthetic skin gives them the opportunity to collaborate with real subjects to produce a product that has a tangible benefit.

“It really is an immersive experience where the students are not only being educated on some technical issues involved in making 3D printing and digital modeling, but also the result of that is not just an academic exercise. But it is something that is actually given and is manufactured and we give it to the participants,” Headley said.

Hana Robinson, sophomore in interior architecture and product design, said one of the challenges in creating this product was getting to know the participants in a compressed amount of time.

“We only talked to (the participants) once or twice before designing the skin, and since we really want to tailor the skins to the type of person, it is difficult to get the whole picture of who the person is in that amount of time,” Robinson said.

Bryce Boyer, senior in mechanical engineering, is one of the six participants that will receive the skin product from the IAPD students. Boyer said he found out about this project through his friend, August Atzenwieler, sophomore in interior architecture and product design.

“I am really looking for two things,” Boyer said. “I really want something that looks cool, but I also would like it to fill out a pant leg so I can look more professional in job settings.”

Boyer said he does not look at being born without either of his legs as a disadvantage. In high school, he participated in marching band and wrestling and has continued wrestling at K-State, where he has also picked up jiu-jitsu, a form of martial art, combat and self-defense sport that uses leverage and special techniques.

He said he has no limitations that he defines himself with. He has traveled to various locations such as Peru, where he climbed Machu Picchu. Boyer said he has no reason to be sensitive about his prosthetic legs; it is just a part of who he is.

“When the kids will stare at me, I want to give them something nice to look at,” Boyer said.

Robinson said Boyer’s passion for movement and doing a wide range of physical activity helped develop the concept of transformation and movement for her design. Getting to know the human subject was one of several challenges the students had to overcome. Robinson said the products have to be designed and completed within a two-week timeframe.

“We started on April 20, and they have to be completed by May 8,” Robinson said.

The process for designing something of this nature should not be easily overlooked. Along with the short amount of time to design the product, the students have been trained in the last couple of months in Institutional Review Board, which is a certification that teaches students and investigators how to properly and ethically work with participants. Headley said the training would allow the students to conduct proper surveys and enable them to work with people outside of the product design program.

With the success of the finished skins, the students learned how to apply their skill-sets in other ways.

“This has a lot of implications, in terms of working with wounded warriors and veterans that are coming, or really just anyone,” Headley said.

The students look at their potential future careers in different terms now. Robinson said this project has really opened her eyes to what she will be capable of upon graduating.

“Now as designers, we have the capability to change someone else’s world,” Robinson said.

Robinson said she has a vision that, in the future, she will be able to help her swim coach’s son, who has muscular dystrophy, be able to achieve his dream of swimming.

“That little boy is incapable of swimming, and he just wants to be like his dad,” Robinson said. “I want to design a product that would enable him to do that, and I think this project helps me realize I can.”

The project has provided insight for what the future might contain for the students.

“As designers, this is our way of contributing back our education,” Headley said. “One man washes the other.” 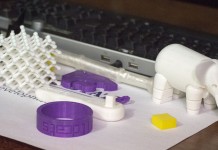 3-D Printing may not take off until next year, still revolutionary