Home Community Opinion OPINION: Tattoos and piercings are a freedom of expression

Tattoos and piercings: accessories that once represented the rebels of the world as an emblem of toughness and defiance are now slowly becoming more common and socially acceptable. While tattoos and some piercings are still not viewed as professional, I still think a few piercings and tattoos that are subtle, meaningful and original should be tolerated by the workforce. People should not have to worry about taking their piercings out or covering up tattoos as long as it isn’t a distraction or danger to their workplace.

Lina Marks, sophomore in management and gerontology, said she recently went to an interview for an internship where she felt obligated to take out a set of her double piercings.

“A typical rule I go by is one stud per ear,” Marks said. “Having multiple piercings or big fancy earrings can distract the interviewer and affect their perceptions of how they view you as a person.”

The U.S. Equal Employment Opportunity Commission prohibits employers from discriminating based on race, color, religions, sex or national origin. This does not include those with tattoos. Employers should not discriminate based on any factor, tattoos included.

Hannah Miller, sophomore in pre-professional elementary education, said she has three tattoos. The one on her wrist is particularly visible.

“Where I work at my job now, I don’t have to cover it up because it’s small, but where I used to work, I had to wear a watch so that people couldn’t see it,” Miller said.

Some people get tattoos based on their religious beliefs, to honor the death of a loved one, to show their artistic expression or simply to be spontaneous and get something spur of the moment that’s permanent. Whatever the case may be, the permanence of tattoos represent the individuality of a person, which should actually be more helpful when hiring in the workforce.

According to a Working World career article titled, “Tattoos and Piercings in the Workplace: Common Sense Advice for Workers with Body Art,” not all employers are against the idea of body art or piercings. Borders, one of the nation’s largest book sellers, sees these things as a definite plus in an employee and thinks it makes them more interesting.

If a manager was hiring a person for a position and asked what the meaning behind their tattoo was, they would be able to learn more about a potential employee based off their response and decision-making process to get permanent ink on their body. Stephanie Boyer, freshman in family studies and human services, said she has a tattoo of a hummingbird with writing on her back.

“I am very happy (I got my tattoo) due to the fact that it meant so much to me,” Boyer said. “The writing is my grandmother’s handwriting, quoting something she would always say to me. The birds represent my late grandfather, who loved hummingbirds. My grandparents meant the world to me and have had a huge impact on my life.”

Getting a tattoo for attention because it’s trendy at the time is a definite no. Unoriginal or inappropriate tattoos will not only promote the past stereotypes of people with tattoos, but it wouldn’t be worth the pain or misfortune as well. Ultimately, everyone should consider the permanency of tattoos, the location of piercings and look for places to work that correlate not only to their professional interests, but also their personal beliefs. Find what works, and don’t hold back on self-expression. 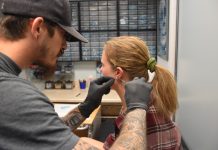 What to know before the needle: Your step-by-step guide to getting a piercing 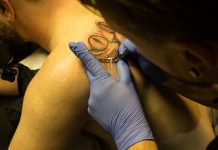 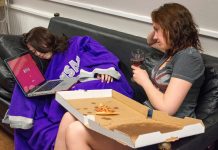