Purple is normally the color of choice when K-State fans descend upon Bill Snyder Family Stadium or Bramlage Coliseum to watch their Wildcats play.

Last Sunday, however, found I-70 packed with more Powercats and purple than usual as K-State fans made their way to the Kansas City Royals fourth annual “K-State Day at the K.”

“It just opens us up to the wider audience,” Alexa Mealy, graduate assistant in fan experience and sales, said. “A lot of fans don’t necessarily come to Manhattan all the time, they don’t necessarily get to come to games every weekend and stuff like that, so they’re not submerged in it. So if they can’t go to games, it’s great for us to come to them and be able to bring posters and schedule cards and all of the information that they want to their area. So we’re coming to them instead of them coming to us.”

K-State didn’t just provide information. In addition to the special edition purple Royals hats provided to K-State fans as they entered the gates, K-State posted members of their cheerleading squad to pose for pictures with the fans.

Wildcat fans were also introduced to the next step in K-State athletics as Wildcat women’s soccer coach Mike Dibbini threw out the first pitch.

“It’s an honor to be out here and representing K-State and the family at the K,” Dibbini said. “I’m enjoying it. This is a great concept out here and I’m loving every minute of it.”

Of course, no K-State event would feel fully authentic without Willie showing up to sign those brand new purple Royals hats and take pictures with Wildcats young and old.

Some K-Staters came to just celebrate the festivities at Kauffman Stadium and enjoy the game. Others, though, were celebrating something a little more special.

Delbert and Erma Anderson trekked from White City, Kansas after receiving tickets as a 61st anniversary gift from their granddaughter. The Andersons were adopted into the K-State family when their grandkids chose Manhattan for their education.

When asked how long have they been Royals fans, Delbert pointed to his wife’s head to reveal a frayed and tattered, but very much intact, Royals hat.

When that hat was new, it also saw a Royals team that was dominant and winning American League Pennants. That very same hat has also seen some dark days in Kaufman Stadium.

But the Royals’ recent rise in prominence has sparked fans like Shawn Lueger from Seneca, Kansas, who grew up a Royals fan and has been a Wildcat fan for most of his life to put some passion back into Kansas City baseball.

“It definitely makes it a lot easier and a lot more enjoyable,” Lueger said. “I know a lot of people will throw out (the term) ‘fair weather fans’ and that sort of stuff, but that’s any team. But after 25 years of blood, sweat and frustration you start to see it going again and it just kind of shows you what kind of place this can be.”

K-State fans know about coming out of years of frustration to finally see the light and now, with purple and blue intermingled, can now proudly tell everyone that they’re a Royals fan and a K-State fan. 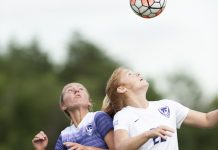 Photos: K-State Day at the K