The K-State women’s outdoor track and field team made good on their top 10 ranking going into the NCAA Outdoor National Championships this past week placing ninth overall.

“Placing in the top-10 is quite an accomplishment for our program,” head track and field coach Cliff Rovelto told K-State Sports. “Even more so when you look at the other programs and coaching staffs that ended up in the top-10 — it’s very humbling.”

The tournament started historically for the Wildcats as junior Akela Jones, competing in the heptathlon, set the NCAA record for first day points with 4,023, a record that has stood since 1985.

“Individually, you go through all the events and she did really, really well,” Rovelto said. “Obviously that means collectively, she did well. To be over 4,000 points in the first day is a world-class level performance, so she had a phenomenal first day.”

Jones wouldn’t stop impressing there as she would go on to break the school record for overall points and came within 69 points of breaking the collegiate points record on her way to netting K-State women’s first individual national title since Ryann Krais took home the women’s heptathlon title in 2011.

“I’m always trying to break some record, create some history,” Jones said. “That’s what I do. I want to leave a legacy. That’s all I come to do when I step on the track. That time [in the 800m] was out of the reach today, but it will definitely be in reach sometime in the future.”

Jones did all of this competing in only her second heptathlon ever.

“Akela had a heptathlon PR and overall PRs in all but the 800m — first and second day score PRs as well. For an athlete to do what she did in literally her second heptathlon in her life is very special stuff,” Rovelto said. “We have had four NCAA champions in the heptathlon and all of them were special. But this performance was the highest score and to the best of my knowledge, unprecedented in the history of the event. From my perspective as a coach, it’s great because I know how much room there is for growth. My challenge and obligation is to get that all out of her. I don’t know about her, but I’m looking forward to getting back to work.”

Junior Dani Winters rounded out the point scorers with a 4th place finish, becoming the only women’s thrower in school history to throw farther than 57 feet.

This season marked the second straight season in which the K-State women have had at least four scorers at a national meet.

The 28 total points gave K-State a ninth place finish tied with Texas. Both schools were the highest scoring Big 12 teams at the meet. 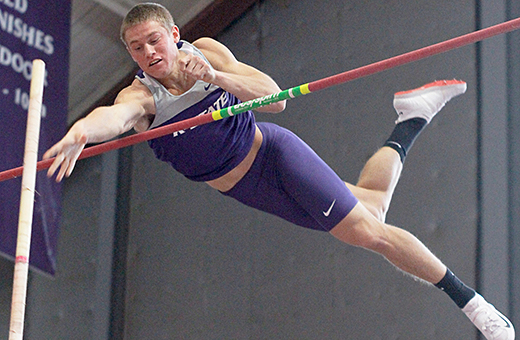