Just after 4 p.m. Sunday, a lightning strike started an attic fire in a single family home at 421 Brookridge Drive. The homeowners were out of town when the fire broke out.

An unidentified neighbor called the Manhattan Fire Department after a fire alarm in the neighbor’s house detected smoke.

According to Ryan Almes, MFD deputy chief, firefighters contained the second alarm fire within 20 minutes. The total loss is estimated at $100,000.

Joe Burfict, a neighbor, said his own home was struck by lightning last year.

“This corner (of the neighborhood) has been a victim of lightning,” Burfict said. “(The lightning) hit so hard, it lit up my living room.”

In a public release, Almes said the owners will be displaced due to the amount of damage to the home.

“This is a hard thing to come home to,” Burfict said. 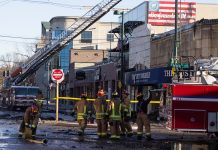