The K-State women’s track team made a lot of noise last week at the NCAA Outdoor Track and Field Championship as they finished ninth overall. It was the first top 10 finish for the women since 2002.

“Placing in the top 10 is quite an accomplishment for our program,” Head track and field coach Cliff Rovelto said to K-State Sports. “Even more so when you look at the other programs and coaching staffs that ended up in the top 10 — it’s very humbling.”

Leading the pack for the woman was junior high jumper and heptathlete Akela Jones, who finish fourth overall in the high jump and brought home the heptathlon National Championship posting the fourth-largest heptathlon mark in collegiate history. It was only the second heptathlon that Jones had competed in her life.

“I’m always trying to break some record, create some history,” Jones said. “That’s what I do. I want to leave a legacy. That’s all I come to do when I step on the track. That time (in the 800-meter) was out of the reach today, but it will definitely be in reach sometime in the future.”

On Monday, Jones was announced as a finalist for the Honda Sports Award presented by the Collegiate Women’s Sports Award office, recognizing the top female athletes in 12 NCAA sanctioned sports. Jones is one of four athletes up for the honor.

In addition to Jones’ performance, several other members of the team put forth point scoring performances that would add to their 28 total points scored.

Sophomore high jumper Kim Williamson finished second which garnered first team honors for her as well. It was the second year in a row that a Wildcat women’s high jumper placed second in the event.

The overall performance also marked the second year in a row that the K-State women’s team had at least four scorers in a national meet. 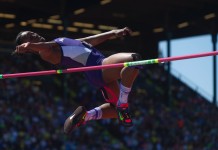