Home Sports Baseball Off the Field with Clayton Dalrymple

Over the summer, senior outfielder Clayton Dalrymple has been playing summer-league ball for the El Dorado Broncos. Before one of last week’s games, the Kansas State Collegian sat down with the Texas native to find out more about life off the field.

As an outfielder, would you rather save a run or score a run?

Dalrymple: It depends on the situation, but usually as an outfielder I love saving runs and helping out the pitcher. Scoring runs is fun, because you get to help out the offense, but saving runs really feels great to do for the team.

Who is your favorite superhero and why?

Dalrymple: My favorite superhero would have to be Batman, just because the movies are so fun to watch and they make sense and they’re interesting.

What was your favorite TV show as a kid?

Dalrymple: It sounds cliche, but over the summer I loved watching Harold Reynolds and John Kruk on “Baseball Tonight” until I couldn’t stay awake anymore. I would watch that show and I’d watch all of the baseball highlights. I thought it was so cool to watch the highlights all the time.

Who are some of your heroes?

Dalrymple: It would probably be Jesus Christ and my parents. I was so blessed as a kid and I wouldn’t be in the position I am today, living out my dream, without God or Jesus. My parents have led me to be such a great person. I think back to my high school years and my middle school years when I was really learning who I was as a person, I could’ve gone down the wrong path, but with the guidance of my parents. I’m really proud of the person I am today.

How do you feel about being a senior?

Dalrymple: It feels weird. I’ve had the best three years of my life. I’ve won a Big 12 Championship, I’ve made a ton of friends, I’ve got to play college baseball in the Big 12 for three years, (and) I’ve gotten to go to Kansas State University. You know, it was my only Division 1 offer coming out of high school, but I didn’t know that my only offer would be to the best university in America. It’s been a huge blessing and I’m ready to experience one more year of it.

Who is a big leaguer that you model your game after?

Dalrymple: My teammate Taylor Anderson’s dad used to coach at Nebraska for a long time, and I’ve heard stories through Taylor and his dad about Alex Gordon who played at Nebraska and now he’s the outfielder for the Royals. He is just the most blue-collar player in the big leagues; he works hard every single day, he lays it all out on the line every day when you see him make those catches running into the chain link fence in left field, running into the stands. He plays hard all of the time and if someone ever told me I played like Alex Gordon, I’d take a lot of pride in that because I know he takes a lot of pride in what he does.

What is your favorite Big 12 baseball stadium to play in (not including K-State’s Tointon Family Stadium)?

Dalrymple: Actually, I’ve had a lot of fun playing in Hoglund Ballpark in Lawrence because in my freshman year we went there and had two come from behind victories and we swept them. This past year, we beat (Kansas) 13-0 on Friday and came back and beat them on Saturday in the eighth inning and ninth inning. My record over three years is 5-1 in Hoglund Ballpark, so that’s where some of my best memories away from Tointon Family Stadium are.

What were your favorite childhood sports teams?

Dalrymple: Dallas Cowboys. Dallas Mavericks’ Dirk Nowitzki was always fun to watch. I had a good sports cry when they won the championship in 2011. Texas Rangers, I was a Dallas sports guy.

What is one thing people would be surprised to know about you?

Dalrymple: I can draw Disney cartoon characters pretty well. Bring me a picture of any Disney character and I can draw it for you. I picked that talent up in high school my senior year when I got exempted from most of my finals because of good grades. I practiced that during down time in school and it’s something I’ve been able to do ever since. 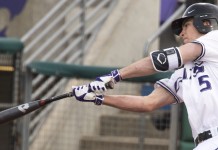 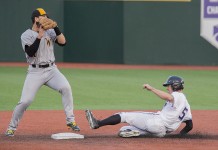