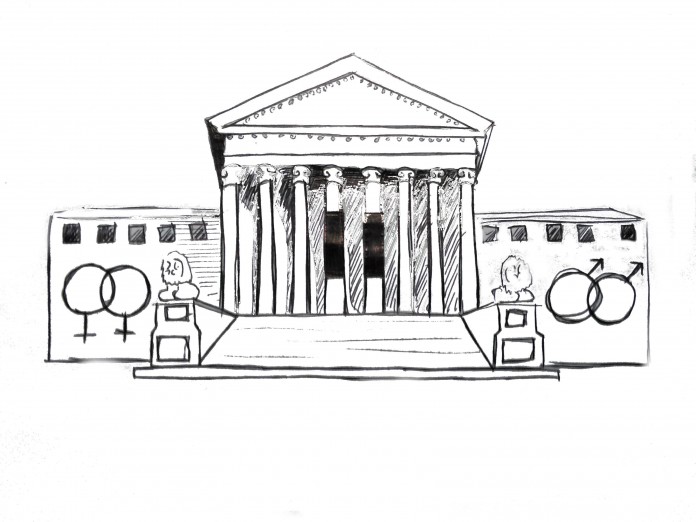 Something big happened recently that a few of you may have heard about. On Friday, June 26, the U.S. Supreme Court handed down its 5-4 ruling in the case of Obergefell v. Hodges, legalizing same-sex marriage nationally. Justice Anthony Kennedy was, per usual, the swing vote, saying that “no longer may this liberty be denied.”

There was, as you also might have heard, some other reactions to the decision as well.

On Twitter, Evangelist Bryan Fischer concluded that “From a moral standpoint, 6/26 has become our 9/11,” as well as choosing to utilize his right to free speech to mention that these deciding “five justices of the Supreme Court became moral jihadists.” He then continued on like that for a good while longer. While he chose to use some of the most extreme language he could muster, he was not alone in his wild anger.

Now, in case you’re accusing me of cherry-picking some fringe reaction, here is the response of Sen. Ted Cruz, who attended Harvard Law School and once clerked for a Supreme Court chief justice. This ruling, and the 6-3 decision on the Affordable Care Act, Cruz characterized as “some of the darkest 24 hours in our nation’s history.”

Even one of the ruling justices, Antonin Scalia, in his statement said, “What really astounds is the hubris reflected in today’s judicial Putsch. The five Justices who compose today’s majority are entirely comfortable concluding that every State violated the Constitution for all of the 135 years between the 14th Amendment’s ratification and Massachusetts’ permitting of same-sex marriages in 2003.”

Judging by this quote, this man was so upset at the decision, he momentarily seemed to lose his faculties; not knowing that, yes, sometimes a court decides on law.

I pride myself on being an open-minded person, and usually can see both sides to an argument. I have my opinion on things like gun control, abortion, economic philosophy, but can understand my opponent’s reasoning. But with gay marriage, I just can’t. You, who would disagree with accepting it, seem entirely unreasonable to me.

So I’d like to address you specifically on why perhaps that is:

You say that marriage is between a man and a woman, and that the Bible says so explicitly.

Well, yes, the Bible does share some thoughts on this, the most famous of which is Leviticus 20:13, which says that “And if a man lie with mankind, as with womankind, both of them have committed abomination: they shall surely be put to death; their blood shall be upon them.”

This same book of Leviticus, however, also explicitly outlaws things like eating pigs, shellfish, escargot, getting tattoos, mixing crops or mixing fabrics, and many other things that almost all of us but the most orthodox do today. So why are you able to ignore most of these Old Testament laws, but insist that those right next to them are absolutely imperative to societal survival?

And don’t say that this is state-sanctioned sin, and that’s why it’s wrong. I bet you don’t say the same about your Sunday football which, besides other real moral problems, is sanctioned touching of the skin of a pig.

This same book that tells you how to properly treat your slaves is the one where you’re basing your whole moral compass? I think not. Would you agree that working on a Sunday (forsaking a commandment) is a worse offense than rape (which is not a commandment)? No, you wouldn’t. This process of choosing what lessons of morality that this holy book espouses apply to modern times, and which lessons of morality were merely for the people of when it was written proves beyond doubt that you have a moral sense completely independent of it.

If you look at the history of humanity, and our striving to progress as a species, it could not be any clearer that morality is constructed by us ourselves. It could not be any plainer. So it seems disingenuous to me that so many latch onto these Bible quotations on homosexuality, which was misunderstood and condemned in the time period in which it was written, and use them to deny equal rights today. As much as it might seem unfair to hear, that is the exact same rational to deny black rights for way too long, one of which, similarly, was to marry white people.

Please, I’m asking you – do not be on the wrong side of history on this. Do not be one of the pages of future history books that kids remark upon “Wow, they really thought this?”

I’ve heard ad nauseam about this besmirch on family values, and how this is an attack on the traditional family unit valuation of marriage. For your own sake, abandon this argument.

First of all, study after study shows that a gay couple makes a perfectly fine family unit. In its February 12 article, “What We Know – Really – About Lesbian and Gay Parenting” Slate details the history – dating back to 1980 – of peer-reviewed studies on the matter: “We found 71 studies concluding that kids with gay parents fare no worse than others and only four concluding that they had problems.”

Second of all, marriage is just absolutely no longer just an instrument of child-rearing. Besides even the obvious counterpoints of whether infertile or elderly couples should be allowed to marry, surely you must see that marriage is a constantly evolving aspect of society. An article, titled, “How marriage has changed over centuries” on The Week, clearly shows this phenomenon. It details marriage as throughout history serving as child-rearing, power-brokering, woman-subjugating, and merely financially-driven.

And we, surely, can all agree that marriage in the U.S. has moved to be primarily a vehicle of romantic love.

This is where the argument against marriage equality really loses me. How on Earth do gay couples wanting to be able to marry disrespect the institution of marriage? The shockingly high divorce rate, though declining, does that just fine. By asking for the same right for themselves, don’t you think it instead shows respect and reverence for the institution?

Gays being able to marry does not do any disservice to your own marriage, so I’m left asking: why, again, are you so upset? The only justification for such vitriol and bigotry is if, somehow, you feel that by asking for this right, they’re intending to hurt you. And I don’t get it. I really don’t. Nobody is reveling in supposed sin to hurt you, so how can you keep hurting them?

OPINION: The life-altering effects of the Oxford Comma

OPINION: Stand there in your wrongness, and be wrong