Last night, one of those events happened that prove why Twitter exists. It had to do with the ongoing NBA free agency, and free agent center DeAndre Jordan. At the beginning of free agency, the opening week teams and players can negotiate deals, but not officially sign them. So contracts are reported as “verbal agreements” and that is, for all intensive purposes, as good as a done deal. However, these past few days have given the world, and Twitter, the exception to this rule.

Jordan, it had been reported, was leaving his former team, the Los Angeles Clippers to sign instead with the Dallas Mavericks. But, the Clippers did not respect the reported agreement, and made one last push to convince him to renege, and re-sign with them instead with another meeting.

Yahoo Source: Clippers, DeAndre Jordan meeting was short. It was clear he was returning to them. Then they started to play cards.

Clippers believe DJ is returning to LA but I'm told they are staying at his house until he can sign at midnight.

Then Mavericks player Chandler Parsons was going to go save the deal.

But not if Blake got there first.

NBA-grandpa Paul Pierce even tried to get in on the fun. The 37 year old posted this, apparently not having quite the same handle on his emojis.

And Lance Stephenson did not quite get what was happening.

This all starting playing out more and more like hostage situation, leading to probably the best tweet of the night.

Don't agree with the furniture layout but I'm not an interior designer. pic.twitter.com/23PNgQB88z

A rumor about Mavericks owner, Mark Cuban, even surfaced, adding to the drama. It drew a direct response.

.@Chris_Broussard that's is the dumbest shit Ive ever heard. If you had any ethics u would msg me and I will give u his address

Ultimately, Jordan did re-sign with the Clippers, spurning the Mavericks, who were left in the lurch. This could lead to future changes to the policies of NBA free agency.

I thought I had a good pump fake.

@tomhaberstroh I just tried to explain the saga to my girlfriend. Blanket stare I've ever received. 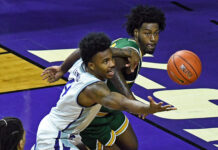 What to Watch: Two top 25 matchups