As President Obama’s prepares to leave for his trip to Kenya, CNN sparks an outrage on Twitter after calling Kenya a “hotbed of terror.”

President @BarackObama isn't just heading to his father's homeland, but to a hotbed of terror: http://t.co/OkTE671wfe pic.twitter.com/ZnrhE8yFzy

Obama is to speak at the Global Entrepreneurship Summit meeting hosted in Nairobi, Kenya.

Busy morning? Here's what you need to know to start your day. http://t.co/kYiwnQshI0 pic.twitter.com/BWUxTC4BGA

CNN’s story started a response hashtag #SomeoneTellCNN. Many tweeters defended Kenya as a place of beauty and culture.

#SomeoneTellCNN Obama is safe in his Homeland +254 a hotbed of Generosity tradition and Rich Culture #PeaceAndUnity pic.twitter.com/V5K5BWnjI5

#SomeoneTellCNN we are a hotbed of Champions. As others fall, we walk on our two feet. pic.twitter.com/9r8cqyI0eZ

#someonetellCNN I'm an American student working in Nairobi and I can tell you it is not a "Hotbed of terrorism". The kindest people here!

While some Tweets were poking fun at the CNN’s “hotbed” comment, others called their journalism ethics into question.

#SomeoneTellCNN that journalism is supposed to be honest, unbiased and unprejudiced

Seriously..???.. that is how they treat Africa… hotbed of terror #SomeoneTellCNN https://t.co/pIVcnFKrj6

The “terror” comment also backfired, fingers were pointed at the U.S. as a place of danger in comparison to Kenya.

As a black man, Obama is statistically more likely to be shot at in the US than in Kenya #SomeoneTellCNN @CNN

Forget Kenya, the real "hotbed of terror", at least for Blacks, is where Obama currently lives! #SomeoneTellCNN pic.twitter.com/HxlVRHSLMH

While Twitter was full of funny, hateful, and many different tweets in between, one tweeter reminded everyone that CNN has yet to apologize for their “hotbed of terror” comment.

#SomeoneTellCNN "when ur hate is strong but your bladder's weak" @desusnice #KOT Waiting for CNN to Apologize! pic.twitter.com/Ld8kM15jMP 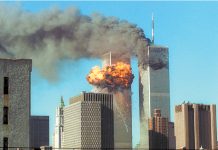