Typically, a fair means fried food, carnival rides and games. Last week’s Riley County Fair, however, also provided lasting memories for both locals and visitors from around the world.

Ottaway Amusement Co., a company that helped make the Riley County Fair happen, employs from all over the globe. DJ Le Roux, 20, came to the U.S. from South Africa to take a job opportunity with the company.

According to Le Roux, the agency uses an application process to find out which carnival is best suited for each candidate. He also said that the job gives a sense exploration and adventure.

Though there are several cultural differences between his home and ours, Le Roux said that many of his co-workers are also from South Africa.

“It just seems like the possibilities in America are so much easier than in South Africa,” Le Roux said.

It’s these carnival workers that make it possible for the Manhattan community to make memories that last for generations.

“(The last time I came to the fair) was when my own kids were younger,” Sean Fox, of Manhattan, said. “It was probably about 10 years ago. It’s pretty much as I remember it, to be honest.”

Fox said he’s gone from taking his children so many years ago, to sharing the experience with his nieces this year. Fox isn’t the only local to recall the consistency of the fair over the decades, however.

“We’ve lived in Manhattan for 24 years, so (we have come to the fair) just about every year,” Pam Stokes, of Manhattan, said. “Our kids grew up here and now we’ve got granddaughters … it’s pretty much the same.”

Photos from the fair: 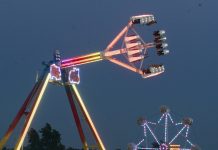 Riled up in Riley County: A look at the 2018 county fair 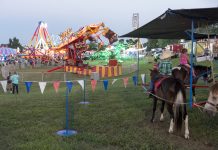 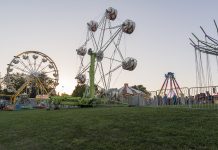