K-State fans received a taste of the 2015 volleyball season during the Purple/White Scrimmage at Ahearn Field House last Friday night.

The scrimmage was different than playing official regular season games. Head coach Suzie Fritz would often switch the teams up in order to allow for the sets to become more competitive, along with going onto the court to give her players instruction after play had ended.

Friday night’s game also provided the opportunity for the players to get the first game jitters out of the way and improve as a team before heading down to Miami this Friday for their season opener against Florida A&M.

“Playing today helped me adjust and get all of the nerves out,” freshman middle blocker Macy Flowers said. “It gets away the first game nervousness and keep me calm for when we play in Miami.”

Flowers had 10 kills and two blocks for the purple team, while sophomore outside hitter Bryna Vogel added 12 kills and 13 digs.

Many of the underclassmen like Flowers, Vogel and freshman outside hitter Alyssa Schultejans, showed the Wildcats that they are going to make tremendous contributions for the team this season.

“I wouldn’t consider them role players,” Fritz said. “They are all key people. We are going to need to be a team that has tremendous offensive balance.”

Junior outside hitter Brooke Sassin played for both purple and white on two sets each, scoring eight kills for the white team and 10 kills off of 22 total attacks for the Purple team.

Sophomore outside hitter, Kylee Zumach, earned 12 kills and 11 digs in three sets for the White team. Zumach switched over to the Purple team in the fourth set and scored two kills off of seven attacks.

Schultejans played three sets for the purple team and had 11 kills and six digs. Playing the fourth set for the white team, Schultejans had a total of 10 kills off of 19 attacks.

“In the last game, our side was getting frustrated because she kept tooling our blocks,” junior middle blocker Katie Reininger said. “She was finding a lot of holes in our defense and taking advantage of some really tricky shots.”

K-State was primarily working on improving first swing offense and offensive consistency during the scrimmage and felt that they had made some improvement on Friday night.

“I thought we were inconsistent a little bit,” Fritz said. “When we were good, I thought we were very good. Unfortunately, we weren’t holding at a certain level. We have to get ourselves in better situations and continue to fight to be in better offensive rhythm.”

While working on offensive flow, both teams competed to grab the upper hand in the match. After the purple team defeated the white team 25-15 in the first set, no team led by more than four points for the rest of the sets.

The match ended in a draw of 2-2 and the excitement keeps on building as the team kicks off their season this Friday in the Hurricane Invitational, playing against Florida A&M. On Saturday, they will take on Illinois State and the University of Miami.

“I thought the team worked really hard,” Fritz said. “It was a very competitive scrimmage, and there was some nice surprises in there. We are excited about where we are at right now.” 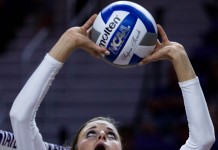