After finishing fifth in the Big 12 last year, the women’s volleyball team ended their successful season with a 22-9 overall record and an appearance in the NCAA tournament.

Even with the loss of five seniors, K-State returns experienced players and talented newcomers to the court.

“(The team) has really matured,” head coach Suzie Fritz said. “We had some nice surprises and some players who put in the time and the work this summer. It is showing in the way they are playing.”

Leading the charge will be sophomore outside hitter Kylee Zumach. Earning the first individual conference honor since 2007 with Big 12 Freshman of the Year award in 2014, Zumach led the Wildcats in kills with a total of 412 last season, averaging 3.59 kills per set.

Coming into this season, Zumach said she realizes that a bigger spotlight is pointed in her direction this season than when she was a freshman.

As one of the leaders for the Wildcats, Brand said that one of their many strengths this season is how strong their team chemistry is.

“We talked a lot about our team chemistry,” Brand said. “We did a lot of team building activities during the summer. Just in our two-a-days, we have seen it all come together.”

Juniors Brooke Sassin and Katie Reininger will provide the Wildcats with an added spark on the attacking end, combining for 1,516 attacks in 2014, as well as on the defensive end. Reininger blocked 130 balls last season, averaging over one block per set, while Sassin had 81 digs in the Wildcat’s 31 matches.

Fritz said she has seen a tremendous amount of work ethic from each one of her players. Adding that on with experience, the team knows this will come as a benefit when they exceed all of their expectations.

“We have some athletes on our team that have played quite a bit,” Fritz said. “I am really enjoying their maturity in terms of their approach and how they are working.”

K-State plays a grinding schedule of both conference and nonconference matches, in which eight of those teams made the NCAA tournament in 2014.

“You have to go and test yourself,” Fritz said. “We are trying to improve in every and all ways each game.”

K-State will open their season against Florida A&M this Friday in the Miami Invitational Tournament. The Wildcats will have their home opener on Sept. 4 against Green Bay at Bramlage Coliseum. 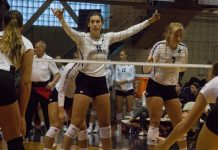