Scandal hit the college football world after it was announced Baylor University defensive end Sam Ukwuachu was indicted on two counts of sexual assault against a fellow Baylor student athlete.

While the assault is enough to cause a stir around the country, new details were revealed that made the situation even more disturbing.

Ukwuachu already had a history of violence against women that led to his dismissal from Boise State University when he transferred to Baylor after his freshman year.

After the assault took place, Baylor made no effort to remove Ukwuachu from classes that he shared with the victim during the investigation.

According to Texas Monthly, the victim, who had been diagnosed with post-traumatic stress disorder, had to change her own schedule so she did not have sit in classes and study halls with her rapist.

Even with all of that in the rearview mirror, Baylor defensive coordinator Phil Bennett said a little more than two months ago that he expected Ukwuachu to join the team in July after having sat out the entire previous season due to “some issues,” according to Bennett.

Of course, since the indictment, that has all changed.

Ukwuachu is no longer a part of the Baylor football team. Briles and his staff are fresh off a preseason number four ranking in the AP poll, the highest preseason ranking in school history, and are revving up to take on old Southwest Conference foe SMU in a Friday season opener on Sept. 4.

Soon college football, something that brings excitement and fun, will come in like the storm it is and slowly drive all of this negativity away.

The justice system has already held Ukwuachu accountable for his despicableness, sentencing him to 10 years of felony probation, 180 days of jail time and 400 hours of community serivce.

However, regardless of whether Briles knew about Ukwuachu’s violent past, Baylor should be held accountable for their treatment of the victim.

One could hope that Ukwuachu will feel the pain, torment and humiliation that has been felt by his victim during his stint in prison; however, the odds of that are extremely unlikely.

“I will never be the same. I’m no longer the soccer player or the social girl. I’m not even __ __,” the victim, whose name was redacted from the quote, said. “I’m just the girl who got raped.”

Ukwuachu dehumanized the victim when he assaulted her. Baylor affirmed that dehumanization by not taking stronger action to protect the victim after the initial harm had been done.

A shining example of adding insult to injury.

On top of that, the victim also lost her scholarship after the assault. While the reason is not clear, her father said the assault hindered her ability to recover from a knee injury and contributed to her losing her scholarship.

At the very least, Baylor is guilty of abusing the trust of a student athlete who thought that the team, the athletic department and the school was on her side.

That’s what anyone in that situation would feel. Unfortunately, that’s not what happened. And, to put it bluntly, that’s just a damn shame. 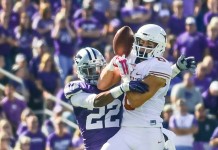