The K-State Ring of Honor honors an elite group of Wildcat players who have achieved success on and off the field, have a high quality of character, have represented K-State well, have achieved All-American status or have performed at a “program-transformational level that warrants consideration” and are five-years removed from K-State, according to K-State Sports.

Wrapping up the Collegain’s profile of the Ring of Honor Inductees is running back Darren Sproles.

What did he do at K-State?

Darren Sproles played at K-State from 2001 to 2004. He’s one of the most decorated athletes in school history. Sproles currently holds 16 rushing records and is in the top 10 on 43 other lists. He holds the school record for career rushing yards with 4,979. To the surprise of many K-State fans, Sproles was not a consensus All-American during his time at K-State. However, he did finish fifth in the 2003 Heisman Trophy vote and was named to the All Big 12 team twice in his career. Sproles was also a star of the first Big 12 championship in school history.

How was his pro career?

He’s about to enter his 10th season in the league after being a fourth round draft pick of the San Diego Chargers back in 2005. Working primarily as a backup throughout his career, Sproles has amassed over 2,500 rushing yards during his pro career and managed to reach his first pro bowl in 2014 with the Philadelphia Eagles. In 2011, as a member of the New Orleans Saints, he broke the single season record for all purpose yards in a season with 2,696. In his 10 seasons, Sproles has played with the Chargers, Saints and is currently a member of the Philadelphia Eagles.

Where is he from?

Although he was born in Waterloo, Iowa, Sproles was a high school legend here in the state of Kansas. At Olathe North High School, he was named to various “All-Kansas” teams and was named USA Today’s Kansas Player of the Year. On the field, Sproles compiled over 5,200 yards and 79 touchdowns, leading Olathe North to a state championship in his senior year of 2000. Sproles’ road to Manhattan included a stop in Lawrence where his role would’ve been reduced much more initially.

“During his recruitment, he told me and his dad told me that he was going to (Kansas) for a visit,” D. Scott Fritchen of Powercat Illustrated said. “Terry Allen had wanted to bring him in as a walk-on, they didn’t think he was worthy of a scholarship.”

What do people who saw him in action say?

“He’s one of the hardest workers and most determined players I’ve ever been around,” Fritchen said. “Dating back to his childhood, he was told he was too small, and when he was going to the NFL, the question was, ‘Is he durable enough?’ and ‘He’s too small and he can’t do the things he did in college up against the big boys in the NFL.'”

Fritchen noted that, even now with 10 years in the NFL, Sproles still continues to disprove his doubters. 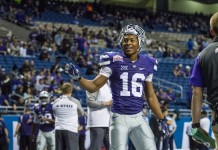 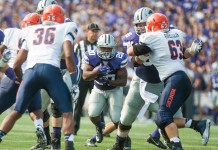