After a long spring and summer of intense competition for who will take the signal calling mantle from the graduated Jake Waters, a decision appears to have been reached.

According to sources close to the program, sophomore slinger Jesse Ertz will be the new man under center going into the 2015-16 season.

Ertz, 2012 Gatorade Player of the Year, redshirted during the 2013 season and back-up both Waters and junior quarterback Joe Hubener in the 2014 season, playing in only four games last season and registering 46 yards on the ground in mop-up duty.

As a quarterback for Mediapolis High School, Ertz broke the Iowa high school record for career touchdowns scored with 98 and ranks fifth all time in career passing yardage with 7,317.

Ertz also won a state championship in track and field for the 4×100-meter relay in his junior year of high school.

During his redshirt year, Ertz won the Red Raider award, given to the top scout team contributor.

Ertz beat out Hubener, true freshman Alex Delton and transfer sophomore Jonathan Banks, who were all in contention for the job. 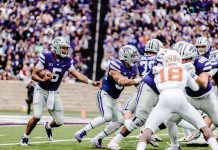 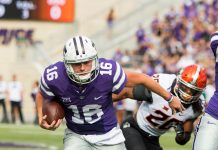 Bat Cats fizzle out in the Kleberg Bank College Classic