Renovations bring change to offices in the Student Union

Work on the Union renovation has forced some offices and student organizations to relocate, according to a K-State press release. The Office of Student Activities and Services and Powercat Financial can now be found at the Cat’s Pause Lounge on the second floor.

Union IT Services is relocating to 208 Union and the Student Attorney’s Office is moving to the Catering Manager’s office on the second floor.

The Student Governing Association has moved temporarily to the Konza Room lobby on the second floor. Union Human Resources can be found at the Party Room in the lower level of the Wabash Cannon Bowl.

The Veterans Center is temporarily housed in the Bluemont Room on the second floor and The Wildcat 91.9 student radio station has set up shop in 312A McCain Auditorium.

Starting Sept. 9, the K-State ID Center will move to Stateroom 3 on the first floor. Commerce Bank will close temporarily Sept. 11 to Sept. 15 while relocating to Stateroom 1 and 2.

Phase one of the Union construction will start Sept. 8, including window and roof replacement, south entrance and southwest corner upgrades, ground floor renovation and a new east elevator.

Karen Burg, vice president for research, announced her resignation from the position, according to K-State Today. Burg is leaving for another position at the University of Georgia. She is expected to leave K-State in the beginning of January 2016. Burg came to K-State in August 2014.

A national search for Burg’s replacement is expected to start immediately, according to Jeff Morris, vice president for communications and marketing.

Charged with the murder of three people at two Jewish sites in Kansas City in April, Frazier Glenn Miller Jr., admitted to the crime and has been convicted convicted, according to the Little Apple Post.

As jurors left the courtroom after Miller’s verdict was given, Miller raised his arm in a Nazi salute, announcing, “You probably won’t sleep tonight.”

Kansas AAA’s research has begun to show dramatic drops in the price of gas in Kansas over the past week, according to a WIBW article.

The average price of gas in Kansas is currently 90 cents less than it was approximately a year ago at this time. It was recorded Monday morning that the average gas price was $2.39 per gallon. 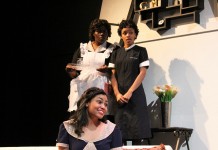 Student advice: What to remember when joining a club at K-State.