Another season has come, and the last time we had a look at Big 12 football we were given not one, but two “true champions.” I can guarantee you this, we will have one true number one team when it comes to the Big 12 Power Rankings.

Regardless of the result when they face Minnesota, the TCU Horned Frogs are the best team in the Big 12. They have one of the best quarterbacks in the nation in Trevor Boykin, who’s 3,901 passing yards from a year ago warrant Heisman-like hype early in the season.

You expected Baylor to be at number two, but that’s now how I see it. The Sooners come back with so much talent from a team that was riddled by injuries and inconsistent play last season. Oklahoma is going back to the up-tempo offense that helped them reach the top of the Big 12 standing in years past. Watch out for the Sooners in 2015.

Baylor’s offense may be one of the most dynamic in the Big 12, and the defense may be finally catching up to the offense thanks to defensive standouts Shawn Oakman and Andrew Billings. However, I’m not sold on the Baylor Bears going with this “Plug n’ Play” offense and thinking that there won’t be a drop off, which is why I have the Bears slightly behind the Sooners to start the season.

This is my Big 12 sleeper for the 2015 season. The Cowboys have finally gotten their quarterback situation figured out and have enough talent to make some noise. The conference schedule being just a bit more kind doesn’t hurt too much either.

On paper, the Wildcats are young and unproven in most eyes. With a defense that returns standouts Morgan Burns and Dante Barnett, K-State will be a team to watch for, especially getting OU, TCU and Baylor all at home in 2015.

If there is one team I wouldn’t want to face late in the season, it would be the Mountaineers. With proven players on both sides of the ball and a solid kicking game, they’re poised to have one of their best seasons in the Big 12. However, they will be tested with a very unforgiving October schedule with OU, OSU, Baylor and TCU. Good Luck.

Things can’t be this bad at Texas right? You still don’t have a quarterback figured out, and you’re starting two true freshman offensive lineman against one of the best defenses in America. Yeah, I’d say things are pretty bad for the Longhorns.

Sure Kliff Kingsbury looks like Ryan Gosling and has a fantastic smile, but can he win ballgames and keep teams from scoring 40-50 points each game? That’s all that separates this Red Raider team from being a player in this conference and Kingsbury not getting fired.

In some ways you kind of feel bad for Iowa State. I mean it seems like after going from back-to-back bowls in 2011-12, it seems like things just can’t get any worse after three and two win seasons as of late. The good news is this, they get Kansas and Texas Tech to start conference play. Cyclones going bowling? Maybe?

Late Night in the Phog starts in how many days again? 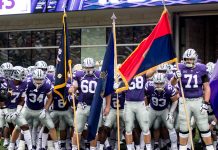 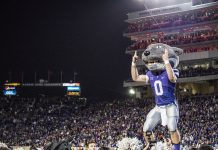 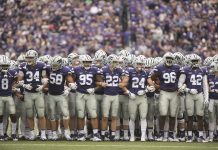