Over the past two seasons, senior defensive tackle Travis Britz has accumulated 23 starts. On Saturday he will once again take the field along with a defense stacked with experience.

“We haven’t played a game in eight months,” Britz said. “We’re obviously anxious to hit someone else, besides our own guys.”

K-State will enter Saturday’s contest against South Dakota with new faces on the offensive end and experienced returners on defense, including 18 returning lettermen.

Britz, who will serve as a team captain this season, said he does not believe the lack of experience in the offense puts additional pressure on the defense.

“We just know that some guys have to step up, and we have all the confidence in the world that some guys are stepping in and doing that,” Britz said.

“We’ve all had the playing experience and starting experience, so we can just get in there and get right after them,” Britz said.

Sophomore Elijah Lee will move from defensive end to outside linebacker this season and agrees that the experienced defense is valuable.

“You know if you mess up, they’ll be there to correct you,” Lee said. “They’ll be able to help you out.”

Davis is joined by junior Charmeachealle Moore in the linebacker position. Moore is returning after missing most of last season due to an injury.

Bill Snyder said he was pleased with Moore’s performance at camp, noting his focus and hard work.

Snyder said he believes the linebackers have responded well together, and Lee said he agrees.

“We just fly around and have fun,” Lee said. “We don’t put too much pressure on each other. If one of us messes up we let each other know and then help each other correct.”

With so many experienced players returning on defense, K-State hopes to build a strong reputation.

Snyder said that there were a lot of things in place that might suggest the defense has a chance to be good this season. However, Snyder worries about the possibility of inconsistency across the board.

“I think the most important thing for us is just to show that we will be better on Saturday than our workout on Thursday,” Snyder said. “I’m looking for greater consistency out of the entirety of the offense, defense and special teams.”

Britz said he feels that the talent of the defense falls upon the leadership stepping up, taking control and building on improvement.

“We do have a lot of talent, and the sky is always the limit,” Britz said. “If you don’t strive for excellence what are you striving for?” 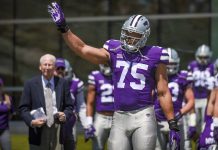 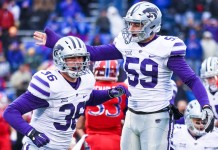 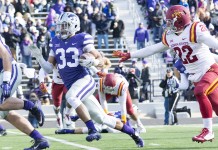 Off the field with linebacker Elijah Lee