Home Featured Home What to watch: week one

College football is back! Fire up the grills, buy the generic brand soda and call up your fellow football fanatics because opening week should be a thrill with these five games that will be played this weekend:

Alabama (#3) vs. Wisconsin (#20) – The Crimson Tide will be kicking off their season Saturday at 7 p.m. central time in Arlington, Texas at AT&T Stadium against the Wisconsin Badgers. Alabama has a real matchup on its hands here as Wisconsin looks to put up a serious upset. After losing their top rusher and Heisman finalist, Melvin Gordon, the Badgers are seeking a first week upset that will shake up the polls. Questions are still being asked as to who will be starting at quarterback for the Crimson Tide as head coach Nick Saban still has not revealed who will be receiving snaps on Saturday. Don’t be surprised if the Badgers give Alabama a bit of trouble.

Ohio State (#1) vs. Virginia Tech – This Monday at 7 p.m., the No. 1 ranked Buckeyes look to send a message when they start their campaign in Blacksburg. Though defensive end Joey Bosa is suspended, OSU looks to kick their season off right with a victory. Look for big games from Ohio State QB J.T. Barrett and running back Ezekiel Elliott as they are both viewed as Heisman contenders going into the season. The Hokies are seeking to repeat last year’s upset over Ohio State when they defeated the Buckeyes 35-21 in Columbus. I don’t see OSU allowing the upset this time around though.

Arizona State (#15) vs. Texas A&M – Now this is one of the more interesting matchups this week due to the fact that A&M, though unranked, is actually favored to win. These two will be kicking off in a neutral location at NRG Stadium in Houston, Texas on Saturday at 6 p.m. A Sun Devils team led by QB Mike Bercovici will be looking to implement their quick, high-tempo offense against an Aggies’ defense who has eight returning starters, including the aggressive pass rusher that is sophomore DE Myles Garrett. The A&M offense hosts the likes of returning QB sophomore Kyle Allen who began starting games at the end of the 2014 season. The ASU defense meanwhile has an extremely experienced secondary in fifth-year student in safety Jordan Simone and cornerback Lloyd Carrington. Look forward to a tight game here.

Auburn (#6) vs. Louisville – The Auburn Tigers will begin their season at the Georgia Dome in Atlanta, Georgia on Saturday at 2:30 p.m. against the Louisville Cardinals. All eyes are on the Tigers’ new quarterback Jeremy Johnson who is expected to lead the offense against a respectable Louisville defense. The Cardinals’ front seven in particular are stellar. Junior middle linebacker Keith Kelsey and senior James Burgess are one of the top defensive duos in the Atlantic Coast Conference and probably all of college football. While I do expect Johnson and his Tigers to take this, it won’t be an easy day for them at all.

Texas vs. Notre Dame (#11) – I expect a blowout here. Notre Dame should have no issues laying waste to the Longhorns. Playing in Notre Dame at 6:30 p.m., the Notre Dame offense will take Texas’ defense to school. Texas plans on starting five freshman so there will be little to no inexperience on the Longhorns’ side. The Fighting Irish have options on offense for sure. Though redshirt sophomore Malik Zaire will be making only his second start, he has a deep receiving corps to give him all the help he needs in Corey Robinson and Will Fuller. 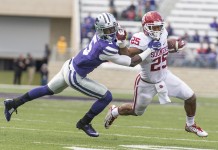 What to watch: will Fournette’s Heisman hopes survive the Crimson Tide?