After rolling through their season opener against South Dakota 34-0, K-State football will make their first of three trips this season into the Lone Star State to take on UTSA this Saturday.

Earlier this year, the Wildcats made the trip down to the Roadrunners’ home, the Alamodome in San Antonio, to take on UCLA in the Alamo Bowl.

Though K-State left San Antonio with a loss, they are determined not to let the past get in the way of future success.

“The mindset for all of us is that we are going back to the Alamodome where we played UCLA, and we just need to go out there and get on them early,” freshman center Dalton Risner said. “We need to do what we have been doing in practice, get on top of them and take everything wrong that we did in the South Dakota game and do it right this time.”

UTSA is led by head coach Larry Coker, who is in his fifth year as the head coach. Before taking over in San Antonio, Coker is most known for coaching at the University of Miami including winning a national championship with the Hurricanes in 2001 season. He is only one of two coaches to win a national title as a first-year head coach.

Coker was fired in 2006 from Miami and, three years later, was asked to start the Roadrunner football program from scratch. From there, UTSA has a 23-24 record over the past four seasons and joined the ranks of being a full-fledged FBS member after spending the last two seasons as a member of Conference USA.

“I think very highly of him,” Snyder said of Coker. “I think we have a great deal of respect for each other. He’s a very talented football coach and, as I’ve said before, his teams are well-coached. Always have been.”

Last week, UTSA started off with a bang putting a scare in No. 22 Arizona in Tuscon, losing by only 10 points.

Bogenschutz was not alone in breaking school records last Saturday as senior tight end David Morgan II with a record nine receptions for 109 yards and one touchdown.

With 95 plays run offensively and 525 yards racked up, UTSA offers a much different look then what K-State saw in South Dakota. A look that Coach Snyder said might remind people of other teams further down K-State’s schedule.

“For future possibilities, I thought it was important to see a tempo team that goes fast and doesn’t huddle,” Snyder said. “That’s what most of the teams in our conference, you know how fast the TCU’s and the Baylor’s in particular, Texas Tech, they work awfully fast … It has to help us in preparation for that element of someone’s offense.”

But even with the octane levels turned all the way up for the Roadrunners, Snyder also remarked that when you get past the frills, UTSA, offensively and defensively, is similar to K-State.

“Defensively you see some of the very same things,” Snyder said. “They’re basic scheme and our basic scheme are very similar. On offense they look a little bit like, more than a little bit, quite a bit like us.”

K-State will look to continue to flex a strong defense that held South Dakota to only 61 yards on the ground and zero points while trying to tighten up their pass offense that gave up 205 yards through the air.

Meanwhile, K-State offense will see junior Joe Hubener start at quarterback for the first time ever.

“It is an exciting opportunity,” Hubener said. “Having never started in high school, this is my first career start. I have something to prove, so hopefully we can go down there and get the win.”

Kick-off between the Roadrunners and Wildcats will be at 11 a.m. this Saturday in the Alamodome. 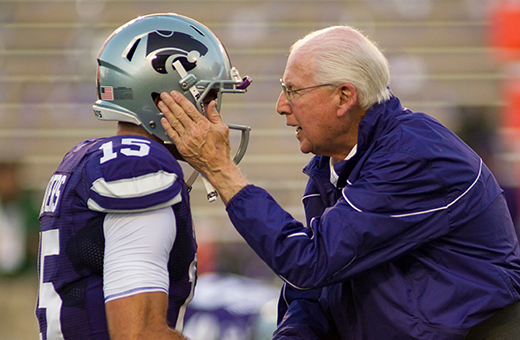