Some college students around the nation seem to struggle with healthy eating and finding the balance between healthful meals and being a carefree college kid. We all make excuses to avoid the proper foods, but what are the effects of some of our favorite bad habits?

These challenges include being away from home for the first time and therefore being in charge of their own decisions, among others. Sometimes, college students take advantage of this in a negative way.

“I have personally found that I have to be mindful of what I am eating,” Kyle Hinrichs, junior in business management, said. “When I first got to college, I ate whatever I wanted, but it seems that my mom actually did have my best interest in mind.”

Hinrich’s statement rings true in the lives of many college students. However, there are ways to get around unhealthy eating. Rosenkranz said she suggests reading nutrition labels; planning, preparing and freezing meals and snacks ahead of time; cooking in bulk; carrying around a handful of nuts or a piece of fruit for snacks; working with a roommate to share the workload that comes with cooking; and researching to see if healthy eating is actually more expensive in the long run.

“I try to eat healthy, but sometimes convenience wins, and I opt for something not healthy,” Hinrichs said. “My favorite unhealthy food is definitely pizza, and I tend to turn to caffeine when I’m tired.”

For Brock Borovetz, senior in construction science and management, convenience foods include PB&J sandwiches, Panda Express and Taco Bell in the K-State Student Union or Chipotle. He said he mostly cooks canned foods and tries to bring snacks to graze on until he can find time to eat a meal.

“(I choose the foods I do) because it’s the easiest and cheapest combination for my budget and cooking skills,” Borovetz said.

Unhealthy food choices can be followed by negative health consequences. According to Rosenkranz, it is never too late to become health conscious.

“Obviously in our society, the main (health risk) that we worry about is cardiovascular disease because it is still the number one killer,” Rosenkranz said.

According to Rosenkranz, her biggest food concern is high-calorie, low-nutrient foods. Let’s look more closely at five popular college foods that fall under this category and their individual health risks.

The Washington Post published an article on Sept. 1, 2014 titled “All those instant noodles you eat may put you at risk for heart problems,” in which they quoted research that found a link to ramen noodles and an increase in people’s risk of metabolic changes linked to heart disease and stroke.

You can use the noodles on occasion, but ditch the flavor packet, which is really high in sodium, according to Dianna Schalles, Lafene Student Health Center dietitian specialist. Add some healthy vegetables, such as peas, green peppers or tomatoes.

These delicious pastries are high in calories and low in nutrients. Beware! The nutrition information on a package of Pop-Tarts can be deceiving – a serving size is actually just one Pop-Tart, but a package contains two pastries, which means that if you eat both, you will actually be consuming over 400 calories.

Opt for oatmeal or breakfast foods and snacks that contain protein and not so much sugar.

Alcohol can actually be beneficial to your health.

“In terms of health outcomes, most research supports that moderate drinking can be a healthful part of your life,” Rosenkranz said. “The one thing where the research is less clear is in terms of cancer.”

However, Rosenkranz said these benefits are not necessarily better than avoiding alcohol, and you should be careful because the extra calories can cause weight gain.

“I think the important thing is that if you are consuming alcohol that you do it in moderation,” Rosenkranz said.

Instead of binge drinking on the weekends, stick to a healthy amount of one or two drinks per night.

An article by Medical News Today titled “Caffeine: how does it affect our health?” said caffeine can be both helpful and harmful to our health. According to the article, some positives of caffeine are that it is a natural stimulant, can reduce the risk of liver and throat cancer, may reduce the risk of suicide in adults, may help long-term memory and can help guard against type 2 diabetes, Parkinson’s disease, cardiovascular disease and stroke.

However, the article said the negative effects include “insomnia, nervousness, restlessness, irritability, an upset stomach, a fast heartbeat and even muscle tremors.” People can become dependent on caffeine, and an absence of the substance can cause withdrawals, the article said. This leads to even more problems.

Schalles said you can find energy from your food choices, which provide energy naturally. Protein and carbohydrates are important for energy.

According to Justine Sterling in her Aug. 31, 2011 Delish.com article, “There are a few healthy foods and drinks that provide energy naturally — no taurine needed! According to Livestrong.com, drinking a lot of fluids such as water or herbal tea throughout the day will up energy levels. Fatty fish, such as tuna (easy to store in cans on dorm room shelves) can help sharpen mental functions.”

Pizza is arguably the all-time most popular college food. In an UIC article from January titled “Pizza adds significant fat, calories, sodium to youth,” said a new study has shown that “on days they eat pizza, children and adolescents take in significantly more calories, fat and sodium than on days they don’t.”

Pizza is the second-highest source of energy in the diet of American youths, according to the article. In addition, the article said pizza consumption could be an important contributor to the obesity epidemic.

Make it yourself. Choosing a whole grain crust or English muffin, then topping it with tomato or pasta sauce is much healthier than ordering from your favorite pizza shop.

Schalles created an “Ask the Dietitian” handout titled “The Freshman 15: Fact or Fiction?” In it, she talked about this issue. Here is an excerpt from the handout:

“It is a widely accepted belief that as a freshman, you may be 15 pounds heavier by sophomore year. But before you let this be an excuse for mindless munching and late night pizza binges, check out the facts:

• Recent studies show an average gain between 2.5 – 3.5 pounds during the first year of college.

• Less than 10 percent of all college freshmen actually gained 15 pounds or more their freshman year.

• Some freshmen are still growing into their adult weights and would gain weight regardless.

• Dorm living did not add to weight gain. (versus living off campus)

• Weight gain tends to accumulate from freshman to senior year; an average of 7-9 pounds for campus females and 12-13 pounds for males.”

According to Schalles, college students are developing habits that will likely follow them into adulthood.

“Rather than obsessing over weight and the latest diet trend, focus on developing a long term healthy lifestyle to prevent weight gain and chronic disease throughout your adult years,” Schalles said.

Both Schalles and Rosenkranz warned against trendy diets and encourage the use of MyPlate, which is the nutrition guidelines recommended by the U.S. Department of Agriculture.

“One thing I would caution students against is to follow the ‘flavor of the month,’ if you will, in terms of dietary advice that you hear because there’s all kinds of crazy things that kind of come and go… ,” Rosenkranz said. “Come back to the dietary guidelines. Look at MyPlate.”

In addition, Schalles said she also advises students to find a balance.

“I always say there’s no good or bad food,” said Schalles. “There’s not one single meal or food or day that’s going to make or break a healthy lifestyle. If you only ate ramen noodles, then yes, that would be an issue. It’s really about the balance.”

In all, the age-old advice rings true: too much of a good thing can be a bad thing. We’re in college, so what can we really do? Whether it be our studies, a weekend out at the bar or the food we put into our bodies, we need to find a good balance and stick to it.

“We need to be a little easier on ourselves and not expect perfection, but within our ability to do better, let’s try to make some positive changes,” Rosenkranz said. 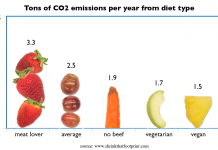