Home Community Similarities between colored powder explosion in Taiwan and events in the U.S....

The Kansas Fire Marshal’s office spread warnings about flammable colored powders after nearly 500 people at the Formosa Fun Coast Water Park in Taipei, Taiwan were burned after colored powder was emitted from a stage and subsequently caught fire, consuming the crowd in a fireball.

“We are just always looking for opportunities to educate Kansans on ways to keep safe,” Kevin Doel, state fire marshal public information officer, said. “When we saw the event in Taiwan, what happened there, we thought that would be something with all these color runs – it’s a very popular trend now – that it’s a possibility that it could happen again, so people just need to be aware of that.”

According to the state website, “The Office of the State Fire Marshal is dedicated to protecting the lives and property of the citizens of Kansas from the hazards of fire, explosion and hazardous materials.”

There is an upcoming color run in Manhattan on Sept. 12, and the state wants participants to be aware of possible risks.

The press release issued following the Taiwan event said the colored dust, which ignited in Taiwan, is generally colored cornstarch and is not normally combustible. However, the release said that if the particles are in the right size and concentration in the presence of an ignition source, an explosion can occur.

According to The Color Run’s website FAQS page, the organization makes the health and safety of their participants and employees a priority, and they have taken precautions to ensure safety.

“As a professional events company with highly vetted policies and processes, we conduct thorough testing to ensure the safety of our materials and their application, and we are confident in the safety of our events,” according to the website.

The Color Run follows strict safety measures and protocols, including the testing of the powder for safe public use, smoking is prohibited within the event area and they require a gap between any stages and the public.

State Fire Marshal Doug Jorgensen said the possibility of an explosion occurring at a color run was not a big concern for his office. He said that the state checked with some of the major companies in the U.S., and they use a different type of process with their colored powder.

Jorgensen also said there were multiple issues that came together to create the explosion in Taiwan.

“What happened in Taiwan is they were using an empty swimming pool, and they had a lot of people packed into the empty swimming pool and it had some type of canopy over the top,” Jorgensen said. “There wasn’t any air movement for (the powder) to sort of dissipate, and it just sort of hung there. And then evidently, either by cigarette or by some type of open flame or spark, that’s what caused the explosion.”

As long as there is ventilation and not a lot of people packed in an enclosed area, Jorgensen said the probability of an explosion occurring is limited.

Manhattan Fire Marshal Rick Stillwagon said Manhattan city policy is that a permit must be signed for all events that occur in the city, and he personally signed the permit for Saturday’s color run. The police department, public works and human resources must also sign the permit. In addition, precautions have been taken when it comes to the event.

“The route will be down Kimball, College, Marlatt and down Denison, so I mean it’s pretty much right (by the fire department),” Stillwagon said.

Mikayla Reves, senior in kinesiology, said she will be participating in the color run. The event will be her fourth color run, but she was not previously aware of any possible dangers.

“I think that I would be more cautious if there were flames around,” Reves said. “I think that (the risk of fire) should be mentioned, especially for stuff like that, because there’s large groups of people that get involved with that kind of thing. That would be nice to know.”

Although event organizers have taken the necessary precautions to ensure public safety, Doel said he advises people to be aware and cautious.

“Even in your own home, you know where your smoke detectors are. You’re supposed to think about an escape in case of a fire. You should always be aware of ways, wherever you’re at, to be safe,” Doel said. 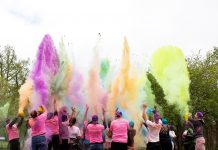