However, many are expressing worry on social media that it will give an even bigger opportunity for bullies and “haters” on the internet.

I #dislike that Facebook is getting a #dislikeButton. We should not be encouraging public displays of negativity.

A ton of scammers and hackers are crying themselves to sleep tonight. #dislikebutton #dislike

A #DislikeButton is going to cause a Facebook hell. "Why did you move me to #3 on your top 10" kind of drama all over again. #Shudders

I know people don't always "like" things on Facebook, but something tells me the #dislikebutton is going to do more harm than good.

On the other hand, with a dislike button, media and social media content producers will now have to work harder in order to make sure that their content does a good job advertising and producing different things.

#contentmarketing get ready for the #dislikeButton it will make us work harder on producing better quality content and copy.

That does’t mean that there aren’t those that are for the dislike button. For some it will be an exciting new change to Facebook.

Not going to lie, when this #dislikebutton is live, I'm never "liking" anything again. All dislikes, all day, for everything. #facebook

This one may or may not be sarcastic:

Now I will finally get to know *exactly* how many FB followers dislike my posts on systemic racism and capitalist greed. Yay! #dislikebutton 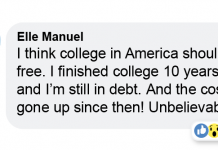