K-State was predicted to finish fifth in the Big 12 conference for the 2015 season and some outside the Manhattan community were questioning whether or not the Wildcats would return to the NCAA tournament.

Their 8-1 start clearly makes the statement that the Wildcats can finish better than what the preseason poll said. K-State is currently tied for second in the conference with TCU, and they trail one game to the University of Kansas, who is currently 9-0.

With Kansas at the top of the chain, TCU sneaking in and the big, bad wolf Texas always in the conversation, the question is, can the Wildcats win their first Big 12 Championship since 2003?

Their grueling nonconference schedule of playing four NCAA tournament teams will prepare the Wildcats for another tough conference schedule. While they are considered a young team, getting the experience of playing top-notch competition helps prepare K-State for challenges they are thrown once Big 12 play begins.

Last year’s team finished fifth and received an invitation to the NCAA tournament. That team produced an attacking percentage of .241 and averaged 13.5 kills per set. In their first nine games this season, the Wildcats have improved to a .304 hitting percentage and are averaging 15.12 kills per set. K-State is ranked second in those categories in the Big 12.

Having no seniors on the roster has not affected K-State whatsoever. In fact, it has helped the younger girls showcase how talented they really are.

Sophomore Bryna Vogel contributed 22 kills and averaged .88 kills per set as a freshman. She did not get to the chance last year to play substantial minutes due to the five seniors she was behind.

This season, she has shown what a freak of nature she really is, averaging 2.88 kills per set off of 95 kills. She is not the only one who has stepped into a huge spotlight.

Freshman Alyssa Schultejans has stepped in for the injured Kylee Zumach. Last season, the Wildcats did not have a freshman other than Zumach that averaged over one kill per set. This season, Schultejans is averaging 2.63 kills per set off of 79 kills.

Statistically, Vogel and Schultejans have produced higher numbers than any of the five seniors on last year’s roster. The upperclassmen are also doing their share.

You typically know what you are going to get from Katie Brand, who is currently averaging 11.39 assists per game and is ranked second in the Big 12 in that category. Adding in 1.03 kills per set, Brand is one of those players who keeps blockers on their toes with no idea what she is about to do, thus keeping all of the focus on her so her teammates can get the job done hitting.

Having not been selected to a Big 12 all-conference team last season, Brooke Sassin has been the most dominant attacker in the conference. Averaging 3.88 kills per set, Sassin is leading the Big 12 in kills and is currently third for points scored.

She has taken her game to a higher level, averaging one more kill per set than she did a year ago.

And of course we cannot forget about Kylee Zumach, who won Big 12 Freshman of the Year in 2014. There is no time table for her return at the moment, but when she does, watch out; Zumach gives the opposition a nightmare when she is on the court.

This K-State team has shown that they can be a threat to any team in the conference and potentially steal the conference title. Their strong team chemistry, the fact that they are not a “one-man show” and that they have one of the most knowledgeable coaches in the country in Suzie Fritz, this team is going to take their game to greater heights.

There is no doubt that K-State will reach the NCAA tournament again, whether that is with an at large-bid or an automatic selection. The Wildcats are setting themselves up for a Cinderella season, one that will be remembered in K-State sports’ history. 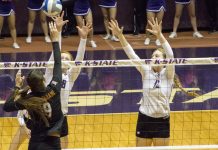