Ogbah had no problem tackling the ball carrier Saturday, producing seven total tackles and sacking the quarterback once. His performance was the highlight of a 32-8 win over Central Arkansas. Oklahoma State’s defensive end is averaging a sack per game and is keeping the Cowboys on track at 2-0.

Despite falling short to Iowa, Pierson dominated once again in just the second game of the season. He had two sacks along with seven total tackles in Iowa State’s heartbreaking defeat to Iowa. Pierson is now leading all FBS members with five total sacks.

Joseph did not have a spectacular outing as he did in week one, but his performance allowed West Virginia to move to 2-0 on the year. He finished with three total tackles against Liberty and continued to cover receivers like a blanket.

Waco, Texas rejoiced once they saw their All-American in uniform on Saturday. Entering his first game coming off a suspension, Oakman’s performance reminded Baylor of what they missed. His six-tackle and one-sack performance helped the Bears blow past Lamar 66-31.

Oakman’s return allowed the load to be lightened off of Billings’ shoulders. His five-tackle effort helped Baylor with the win, and it gets the Bears one win closer to the College Football Playoff.

With Dante Barnett out with a shoulder injury, the Wildcats needed their defensive line to step up. Bryant did exactly that, sacking the quarterback for the second straight game. K-State’s defense has yet to give up a touchdown this season, and it will be difficult to do so if this Bryant keeps making plays.

With some strong statements about the SEC coming out of Striker’s mouth last week, he certainly backed up his comments. His half a sack and six total tackles allowed the Sooners to rally from a 0-17 deficit to claim the game in Knoxville, Tennessee 31-24 in double overtime.

After a poor performance in week one, Sanchez made up for it in week two at Tennessee. His one interception and six tackles saved Oklahoma’s hopes of stealing a bid in the college football playoff with their come-from-behind win against Tennessee.

K-State’s 30-3 victory over UTSA was largely credited to a strong defensive performance by Britz. He sacked the Road Runners’ quarterback twice and added in four total tackles in San Antonio. K-State is quietly one of the country’s most dominating defenses and Britz showed why on Saturday.

Kwiatkoski
did his job on Saturday, which was to tackle the ball carrier. With seven
total tackles, Kwiatkoski was a major contributor in the Mountaineer’s 41-17
week two win over Liberty. The senior linebacker, however, has yet to sack the
quarterback this season and the Mountaineers are counting on him to put pressure on the opposing offense. 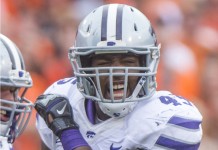 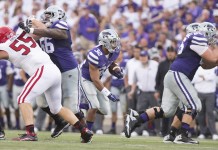 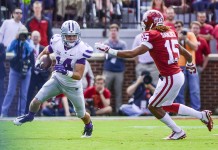