K-State’s Equestrian team will kick off the 2015-16 season on Sunday with the fifth annual Purple-White Scrimmage. The scrimmage is meant to give riders the opportunity to compete in a varsity setting.

“We have had great preparation heading into the season and this scrimmage allows everyone a great opportunity to see where they stand,” head coach Casie Maxwell said to K-State Sports. “Coaches get to see riders perform under pressure and athletes get to assess what they need to focus on before the first countable competition. It is a great test run and also a rare opportunity to see everyone have the opportunity to compete.”

The Wildcats have won 18 consecutive home meets over the last two seasons. Last season, K-State was undefeated at home and finished the regular season with a 9-9 record.

K-State will return two NCEA All-Americans and four riders who were named Big 12 Rider of the Month in their individual disciplines.

K-State will kick off the regular season on Oct. 3 when they travel to Brookings, South Dakota to take on South Dakota State. 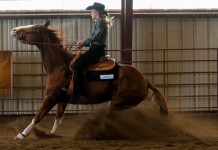