K-State volleyball wraps up their final stretch of nonconference games with a trip to Omaha, Nebraska for the Creighton Classic this Friday and Saturday.

The 8-1 Wildcats are boosting their way to the top of the conference, tied for second with TCU and one game behind the University of Kansas for the top spot of the Big 12.

K-State is putting themselves in the national spotlight as well, receiving 63 votes in the American Volleyball Coaches Association Top 25 poll this week.

Winning two out of three games in Omaha over the weekend would push them into the Top 25 before the Wildcats begin conference play at Kansas next Wednesday. The road to get there, however, will come with a challenge.

All three of K-State’s competitors received an invitation for the NCAA tournament in 2014 and have continued that success this season. Having won six straight games, the Wildcats looks to keep their momentum going as they reach the homestretch of nonconference play.

The 11th-ranked Badgers come into Omaha with a 6-1 record and three returning All-Big Ten members, who were apart of Wisconsin’s NCAA tournament team who made it all the way to the Elite Eight.

Lauren Carlini, 2014 Big Ten Player and Setter of the Year, is having another dominate year, averaging 11.70 assists, 2.70 digs and 1.04 blocks per set. Carlini’s quality sets are a main reason why Wisconsin has success on offense, producing a .276 hitting percentage.

Reining Big Ten Defensive Player of the Year Taylor Morey is averaging an astounding 4.65 digs per set. Along with Morey, Wisconsin makes it difficult for any offensive team in the country to score, with their opponents hitting percentage averaging .122.

K-State’s high powered offense of 15.12 kills per set (second in the country) and .304 hitting percentage (ninth in the country) will give the Wildcats a chance to knock off Badgers.

Coming into Omaha at 8-1, the Razorbacks will look for revenge on the Wildcats after their 0-3 defeat to K-State in Manhattan last season.

After a 1-3 loss to Kansas in the third game of the season, Arkansas has won six straight, matches thanks to an attacking percentage of .286 and a 13.8 kills per set average.

Victoria Pillar gets the Arkansas offense firing, averaging 4.29 kills per set along with 2.76 digs per set.

Arkansas does not receive more attacks than their opponents, getting 650 swings compared to their opponents 689. When the Razorbacks do attack, they make it efficient.

As one of the top teams in the Southeastern Conference, the Wildcats will have their hands full on Saturday.

As the tournament host team, Creighton comes in standing at a 4-6 record. While the Bluejays may have a losing record, they have played one of the toughest nonconference schedules in the country.

Four out of six of their losses have been from teams ranked in the AVCA top 25 poll, three of those coming from Top 10 teams.

The Bluejays managed to pull out a victory over No. 24 Kentucky 3-0 in Cedar Falls, Iowa, however, they will look to knock off some of top notch teams on their home court.

Jaali Winters leads the Bluejays with 125 kills and averages 3.38 kills per set this season. Jess Bird is a heavy contributor as well for Creighton, averaging 2.73 kills and 3.03 digs per set.

While the Bluejays only have produced eight more kills than their opponents, the Wildcats will have another tough match with a team that is ready for any challenge that is thrown at them. 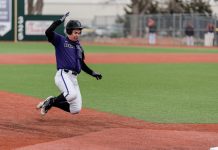 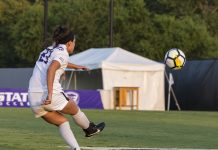 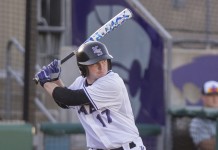