President Schulz delivered the annual State of the University address on Friday afternoon to faculty members and students in K-State Alumni Center ballroom. In his presentation, Schulz addressed enrollment and various achievements for the university, students, faculty and staff.

Enrollment rates have dropped for the university. Last fall, 24,766 students were enrolled; this semester enrollment is down 554 students. However, according to Schulz, K-State remains the number one choice of universities for Kansas high school graduates.

“While we may be down; we’re still bringing in really gifted students and a diverse student body, which is part of what I think is important for us as we look into the future,” Schulz said.

According to the Princeton Review, K-State is ranked the fifth best-ran college, the fourth college with the most happiest students, and ranked sixth for quality of life.

“I really liked where we’ve gotten as a university and where we’re headed,” Fred Guzek, faculty senate president and arts and sciences professor at K-State Salina, said.

The number of international, multicultural and black students enrolled at K-state has also declined from last year’s fall semester. Dana Owens, K-State alum and professional school counselor for Topeka Public Schools, said this was a concern.

Schulz also highlighted some of the construction projects that are in process around the campus including the completion of Seaton Hall, the continuing expansion for the engineering building, progression of the College of Business Administration Building, the Berney Family Welcome Center and the K-State Student Union. 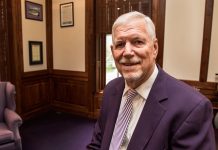 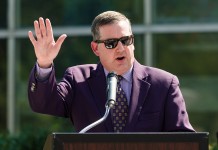