Head coach Bill Snyder may not have been thrilled about how it happened, but on Saturday, K-State fought their way through an over four hour, three overtime slog to come out on top 39-33 against Louisiana Tech.

“I will say I’m proud of them,” Snyder said. “This group of young guys has not been in that situation before and through heck and high water they managed to carve their way through it. I’m not exactly sure how but they did and at least we’re 3-0.”

In the first half, it seemed that nothing could go right for K-State.

They had three trips to the red zone, two of which ended in field goals after stalling out and a third ending in a fumble by redshirt freshman fullback Winston Dimel just several plays after K-State freshman linebacker Sam Sizelove stripped the ball from the Bulldogs on a kick.

Senior kicker Jack Cantele knocked in both attempts from 33 and 38 yards respectively.

However, while Louisiana Tech struggled, they were able to find pay dirt in the first half by way of a 1 yard touchdown run on the goal line by Bulldog quarterback Jeff Driskel.

Driskel would continue to be a problem for K-State, rushing for 79 yards and another touchdown in while throwing for 314 yards on 30 of 51 passing with one touchdown and no interceptions.

“I think (Driskel) was really seeing the field well,” Louisiana Tech head coach Skip Holtz said after the game. “He was making really good decisions with the ball and not putting it in danger if it was not there.”

K-State would go into the locker room at half down 10-6.

Things seemingly picked up in the second half.

Louisiana Tech broke the second half scoring bubble on a 39 yard field goal giving the Bulldogs a 13-6 lead.

The Wildcats would respond in kind as Justin Silmon seemingly drove the length of the field by himself before Hubener threw a spectacular 4 yard touchdown pass to junior wide receiver Kody Cook, who fought through contact to make the over-the-shoulder grab.

Cook would go on to lead K-State in receiving, catching four balls for 73 yards and two touchdowns.

“I just try to be ready so when my name is called I can be prepared and help the offense,” Silmon said.

The Bulldogs would not take long to respond. Sparked by a 36 yard run by Louisiana Tech rushing phenom Kenneth Dixon, Driskel ran in a eight yard quarterback run to give the visitors from Ruston, Louisiana a 20-13 lead.

Dixon, who came in as one of the top rushers in the country, was held to only 81 yards total on the ground, 25 receiving yard and zero touchdowns.

This was the first game this season that Dixon was held under 100 yards on the ground and scoreless.

K-State’s offense would again flounder on the ensuing drive.

However, the Wildcat defense would find it’s legs and force the Bulldogs to punt leaving freshman wide receiver and punt returner Dominique Heath to run it all the way back to the four yard line on a huge 42 yard kick return.

This came after a muffed punt by Heath earlier in the game almost turned the ball over if not for the sure hands of senior special teams captain Stanton Weber.

Several plays later, junior running back Charles Jones would force the ball into the end zone in the Wildcat formation to tie it all up at 20.

K-State’s offense would get the ball back soon on a fumble forced by Elijah Lee and recovered Jordan Willis.

Willis had led the Wildcats with 2.5 sacks while Lee led the team in tackles with 12, two of those being sack including a sacking Driskel in the second overtime that aided in making the Bulldogs stick with a field goal to send the game into a third overtime.

“That sack was nuts,” Hubener lamented. “I feel for Driskel on that one because I know that couldn’t have felt good. I don’t think he saw it coming and (Lee) just knocked him out.”

K-State was denied a touchdown on that drive but Cantele knocked in a 20 yard field goal giving K-State a 23-20 lead with a little over 2 minutes remaining.

After K-State kicked. Louisiana Tech would once again respond, hitting a 45 yard field goal after driving the length of the field to tie everything up at 23 a piece and to take the game into overtime.

Louisiana Tech won the coin toss and they chose to let K-State start off on offense.

On third down, Hubener threaded a 22-yard touchdown pass to Heath, who was surrounded by defenders, to give K-State a 30-23 lead.

“(Heath) was just out there playing football,” Hubener said. “That’s not what we would have anticipated but, like I said, the defense played it weird. He did what he saw was a opening and somehow it got through there.”

Louisiana Tech would respond yet again on a six yard Driskel touchdown pass to Trent Taylor to tie the game up once again, sending the game into double overtime.

The Bulldogs started double overtime with the ball and were not able to do much with it as they opted to kick the field goal on 4th down to take a 33-30 lead.

The Wildcats would have a similar go of things on their possession relying on Cantele to hit a 44 yarder, which he did, to extend the game to yet another overtime.

“The wind had changed and all of the sudden the wind was working against us,” Snyder said. “We were getting on the fringe because of the lost yardage play that we had. But he stuck it right in there.”

Cantele went 4-4 for the day on field goals.

K-State started with the ball in the third overtime and after be saved from having to kick a field goal by a chop-block call, Hubener hooked up with Cook for a 31 yard touchdown pass. The Wildcats failed to convert on the required two point conversion giving K-State a 39-33 lead.

Hubener ended the night throwing for 195 yards on 15 of 26 passing and three touchdowns.

“When Joe is right, he is right,” Snyder said. “The inconsistency is what you have to have some concerns with, but when he does it he can do it as well as anyone.”

That is where the craziness would end however as Louisiana Tech would be unable to convert on a 4th and 10 pass play to tie it up once again.

“We were not sure if they were going to throw it every time,” senior cornerback Morgan Burns said. “We were trying to get some pressure on the quarterback so we brought more blitzes to rush them a little harder.”

The win gives K-State a 3-0 record going in to their bye week before packing up and hitting the road for the second time this season as they head down to Stillwater, Oklahoma to take on Oklahoma State. 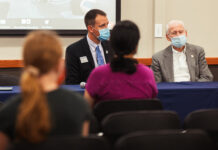 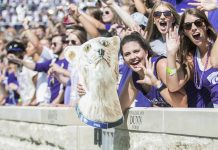