Navigating the richly adorned maroon and yellow hallways of the Dalai Lama’s temple in Dharamsala, India, Kylie Sturgis, senior in public relations, said she could only think of how lucky she was to be there.

Had it not been for her minor in leaderships studies’ emphasis on understanding other viewpoints and taking a risk, Sturgis may not have had the chance to travel by herself to work with EduCare India. She credited the valuable lessons she gathered over the years to taking classes from the Staley School of Leadership, which contributed to who she is today and what has driven her.

“If you’re willing to it, it opens up your mind to a lot of different things,” Sturgis said. “I graduated with a class of 18, so my view on the world was pretty small. I was open to expanding it, but I didn’t necessarily have those opportunities. From what I’ve learned, you get to see issues from more than one lens, and I think that’s important in developing you as an inclusive and active citizen of the world.”

While the Staley School of Leadership Studies strives to help foster and create “caring, inclusive leaders for a diverse and changing world,” it is not the only helpful minor. There are a number of minors offered to students that can supplement their studies both inside and outside classes, no matter their majors.

“There are roughly 60 minors at K-State, and while I wouldn’t pinpoint either one or two that are better than others, I would say that there are common ones that I’ve heard employers talk about,” Jared Meitler, coordinator of the Academic and Career Information Center, said.

Meitler said that some of these common minors include foreign languages and leadership.

“For example, employers often talk about students coming out with leadership skills, so studying leadership studies would seem like a logical fit,” Meitler said. “Another thing that is marketable in a global marketplace is students being able to speak more than one language, so I can definitely see value in a student understanding how to communicate in French, Spanish, German or anywhere that a company does business around the globe.”

Laura Kanost, associate professor of Spanish and director of undergraduate studies, reiterated the importance of studying languages in order to expand world views and seem more appealing to certain employers.

“Working with language in different contexts helps students to develop the ability to understand and express more complex ideas,” Kanost said. “Bilingual people can draw from two cultural and linguistic frameworks, so they are more aware of the existence of differing views or approaches. Being bilingual exercises the brain in a way that gives cognitive benefits and enhances memory, attention and creativity.”

Kanost also said that translators and interpreters are one of the fastest growing professions in the job market and being able to communicate beyond language barriers was widely beneficial.

“Understanding language and culture can make or break an international business endeavor,” Kanost said. “Speaking to someone in their language and within their cultural codes conveys respect and good will that can go a long way in building a professional or community relationship.”

Valuing the differences between people and working together with the resources at hand was one of the core bases of leadership studies, according to Sturgis.

“I know there’s a lot of people who enjoy being challenged and looking at things in a new way,” Sturgis said. “It can be pretty different for some people. So if you’re an engineering major and you have really structured ways of thinking, like there’s a right or wrong answer all the time, sometimes leadership studies can be this breath of fresh air that’s like, ‘there’s all these different answers and there is not one way to look at something.’ It can help make students more well-rounded since college is the time to do that.”

If a student was unsure of the opportunities available or what step to take next in regards to their academic career, Meitler suggested they meet with someone at the ACIC or attend the Majors, Minors and More Fair on Oct. 14 from 11 a.m. to 3 p.m. in the Grand Ballroom in the K-State Student Union.

“(The fair) is representative of nearly all the 250 plus programs that are available to students, so I think that’s attractive that they can get all the information in one place,” Meitler said. “The other thing is that students can get information straight from students that are studying, as well as faculty that are teaching in the classroom.”

According to Meitler, exploring these options could really be helpful in creating a versatile student and an appealing employee.

“Employers are looking for a lot more than just what a student is majoring in,” Meitler said. “In addition to clubs, organizations, part-time jobs, internships, leadership roles, etc., adding a minor in an area that differentiates a student can really be marketable when it comes to applying for those internships and jobs after graduation.” 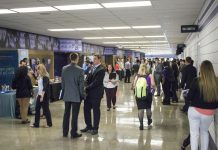 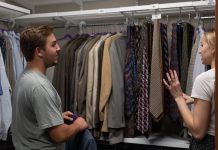 These on-campus resources can help you nail your next interview

OPINION: Why passions win over money