Now that the second Republican primary debate has come and gone, it is clear that the party is in need of a candidate that can actually win in the general election rather than simply appease the radicals on the far right.

Republicans cannot win the general election using the talking points that were on display at the debate. There needs to be a shift in the way they present themselves to the undecided voters in order for them to win the nationwide election next November. The clearest way for them to do so is through three issues: gay marriage, legalization of marijuana and immigration.

Legal same-sex marriage has become the law of the land since the Supreme Court ruled in favor of it last June. Republicans need to accept it and move on. A July 29 Pew Research poll showed that 55 percent of Americans support allowing homosexual couples to marry and 61 percent of independents are also in favor. It would be very foolish for the GOP to ignore these numbers. Not only do the majority of Americans agree with the Supreme Court, but it’s the pro-gay independents it should focus on. These are the people who decide elections and who need to be won over in order to defeat the Democrats.

Former Arkansas Gov. Mike Huckabee is the chief example of how maintaining a strong anti-gay stance hurts the party. He helped lead a rally for Kim Davis, the Kentucky woman jailed for refusing to issue marriage licenses to homosexuals, hoisting her hands in the air after her release. General election voters are going to look at this and get a sense of homophobia, which will then get roped in with the party as a whole.

One Republican candidate who has handled the issue well has been Ohio Gov. John Kasich, who during the first debate held by Fox News said that he would accept the Supreme Court’s ruling. When asked what he would do if one of his children were gay, Kasich said, “So, if one of my daughters happened to be that, of course I would love them, and I would accept them, because you know what, that’s what we’re taught when we have strong faith.” He was able to successfully appeal to the moderates on the issue, as well as cite his faith, which encourages tolerance.

The issue of marijuana legalization is a test to see if the GOP will be able to use their own principles to appeal to those outside of the party. A 2015 poll titled “Six facts about marijuana,” again done by the Pew Research Center, showed that 53 percent of Americans support legalization. The fact that this has risen from 32 percent in 2006 indicates that the number will only continue to rise.

This could be an issue the Republicans should jump on. There are several angles the Republicans can use on the topic, such as state’s rights to decide legalization, taxation revenue that will result, medicinal benefits or the expenses needed to enforce current laws. Doing this will appeal to the 58 percent of independents, as cited in the polling, that support legalizing marijuana.

Kentucky Sen. Rand Paul’s support for letting states decide for themselves in regards to drug laws is rooted in the racial imbalance that has plagued the war on drugs. In the recent debate Sen. Paul discussed the issue.

“The people going to jail for this are poor people, often African Americans and often Hispanics,” Paul said. “Yet the rich kids who use drugs aren’t. I personally think that this is a crime for which the only victim is the individual. And I think that America needs to take a different attitude.”

In saying this, he is speaking about more than how he feels about pot, he is showing concern for the poor and minority citizens as well as the unfair advantages given to the wealthy.

It should be noted that marijuana isn’t going to win anybody an election. What it does is allow a candidate to illustrate to the electorate that the Republican Party isn’t only catering to rich, white males, but that they are able to think about society as whole when taking stances on issues as Paul did so articulately.

The biggest adaptation needed by the Republicans will have to be done in the realm of immigration reform. The party needs to focus on putting illegal immigrants on a path to citizenship rather than orchestrating mass deportation or debating how tall a wall between the U.S. and Mexico should be.

Putting forth a stance rooted in compassion will help put a dent in the overwhelming amount of support the Latinos gave the Democrats in the 2012 Presidential election, where President Barack Obama attained 71 percent of their vote, according to the Pew Research Center in 2012. Committing to helping Latinos reform immigration could very well end up benefiting the GOP the way pushing civil rights for African Americans did for the Democrats in the 1960s. It’s just bad strategy not to invest in this group of potential voters.

When presenting their immigration stance, the ideal candidate needs to do so in a way that comes off as genuine. The two candidates doing this best are Sen. Marco Rubio and former Gov. Jeb Bush, both of Florida. Rubio often tells the story of his Cuban immigrant parents and their goals for their son. Bush speaks of the influence his Mexican-born wife had on him and his views, as well as speaking Spanish as a way of reaching out to the Latino community. This appeals much more to the people really invested in the issue than candidates who use lines such as candidate Donald Trump who infamously said of illegal immigrants, “They’re bringing drugs. They’re bringing crime. They’re rapists.”

This is a guide for the first steps the Republicans will need to take if they plan on winning the election based on their own merit and not because the country wants to try something new after eight years. Gay marriage, marijuana legalization and immigration are great moves to get the party in a place where they become a legitimate option for most people. The important thing to remember is that if they are truly serious about becoming real contenders, they will need to release themselves from the shackles of their party base and step closer to the center where the rest of the country is. 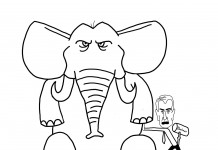