K-State’s equestrian team geared up for the 2015-16 season with the Purple-White Scrimmage on Sunday at Timbercreek Stables. K-State was undefeated at home last season.

Riders competed in Equitation over Fences, Equitation on the Flat, Reining and Horsemanship. The scrimmage was set up to mock a game day setting, with riders competing head-to-head on pre-drawn horses.

With more experience, several riders looked to build on their momentum after a strong finish in the 2014-15 season.

In the Western discipline, senior Danielle Kemper competed for the purple team in Horsemanship. Last season, Kemper was named to the All-Big 12 Team in Horsemanship as well as the NCEA All-American Second Team in Horsemanship. Kemper was also awarded the Overall Most Outstanding Award in Western. This award recognizes one student athlete for their leadership to their teammates throughout the year in the 2014-15 season. Kemper finished last season with a record of 12-4-1.

Also in Western, senior Kara Guy competed for the white team in Reining. Guy finished last season with a record of 10-6-1 and received the Most Outstanding Award in Western.

With the scrimmage under their belt, K-State will look ahead to their season opener against South Dakota State on Oct. 3. 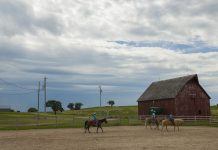 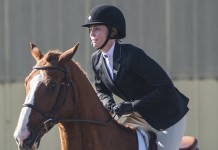