Peanut Corporation of America Executive Stewart Parnell is currently facing life in jail for sending tainted peanuts all across America.

Parnell was informed the peanuts were tainted, but informed a plant manager to “Just ship it,” according to Monday’s CNN article, “For first time, company owner faces life sentence for for poisoning outbreak.”

The executive faces life in prison while his plant manager, Mary Wilkerson, is facing five years and Parnell’s food broker, Michael Parnell, is looking at 17 years.

Social media has been taking the opportunity to voice their opinions on the man who knowingly got several people sick.

"For personal greed? Why did you do it Stewart?" People want Parnell to be held accountable for his actions. #PeanutTrial @WFXL

I really hate America what it stands for nothing but lies and death or is it death and lies #KendrickJohnson hope Parnell Peanut gets life!

Peanut executive, Stewart Parnell faces sentencing – today is the day for PCA criminal – hopefully they go to jail for a long time 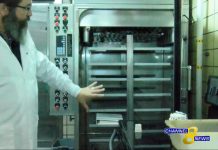