Chalking is a popular way to advertise events on campus. On Monday, however, it also became a way to make a political statement.

“In response to the House Republicans defunding Planned Parenthood, the College Republicans wanted to give a pro-life message and bring awareness to the issue,” Meyers said.

On Friday, House Republicans in Congress voted to halt taxpayer funding of Planned Parenthood for one year.

Some of the messages included, “Dear Planned Parenthood, go fund yourself,” and a list that compared abortion numbers to the genocides committed by the regimes of Adolf Hitler and Mao Zedong.

“There was some talk about one of our messages today,” Meyers said. “We used the word ‘fund’ and not any explicit language.”

Meyers was referring to an overnight incident where it appeared that parts of the chalking were washed away, leaving an impression that the message originally contained obscenity.

Shelby Lolley, sophomore in political science, said she wanted to chalk because she thought the College Republicans’ message was too negative and one-sided.

“I wanted to offer another voice,” Lolley said. “Instead of spreading hate, I want to teach tolerance.”

She was joined by her sister Kendell Lolley, senior in horticulture. Kendell said she thought the group’s message was meant to elicit negative reactions from students.

“They were looking for a fight,” Kendell Lolley said. “It was pure hate.”

Evan Steckler, sophomore in architectural engineering and secretary of the College Republicans said the group did not intend to offend anyone with their messages.

On the student group’s Facebook group page, however, Steckler wrote about how to respond to pro-abortion chalkers Sunday evening, encouraging College Republicans to write over pro-abortion messages.

“We did a pretty good job of covering campus tonight, but as long as you’re always more civil and respectful than them, please go for it,” Steckler wrote. “Throughout this week, feel free to go out every night and edit the bad stuff and add new good stuff. Spelling and grammar are key too.”

The pro-abortion rights messages in Bosco Plaza written on Monday night were written over later in the evening by members of the College Republicans, according to their Facebook page.

In a post written by Jacinta Bergkamp, freshman in agribusiness, she wrote, “Decided to do one more chalking before I call it a night. Hope all goes well tomorrow morning!”

Meyers said the group received a lot of backlash on the social media app Yik Yak. Steckler said the response was not entirely unexpected.

Steckler said the messages were meant to inform rather than inflame.

“Some people don’t understand the issues,” he said. “The big problem is not in having an opinion, it’s in not having enough information to form an opinion.”

However, Steckler wrote in the Facebook group Sunday night about a pro-abortion message added to one of their anti-abortion messages, “And there we have it, folks, taking the form of two words hastily scribbled onto the concrete at 9:00 at night: the purest and most concise form of campus leftism I’ve ever seen. Tomorrow should be fun.”

“It’s insulting,” Shelby Lolley said. “There’s a large amount of women being degraded by this.”

Trevin Garcia, junior in English literature, was one of the students chalking their own messages in Bosco Student Plaza. He said he wanted to provide more information to K-Staters than what was given by the College Republicans.

“I really just want people to have a full picture of what’s going on,” Garcia said. “The information that was chalked by the College Republicans really skewed to the right. I wanted to give people the full story.” 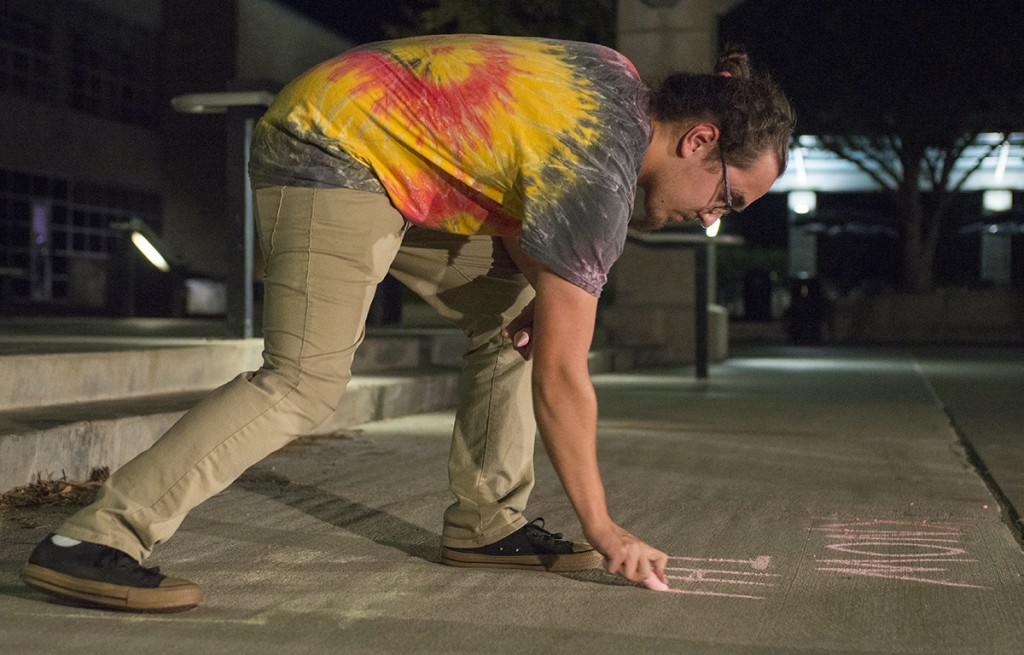