Home Culture Feature Deciding on a major sometimes takes a while

Fifty to 70 percent of students in the U.S. change their major at least once during their college career, according to a report by the University of La Verne titled “Major Exploration.” Three K-State seniors have gone through the major-changing process, but with their passions and past life experiences, they’ve said they are confident in their final major decision.

Victoria Banks, senior in social sciences and international studies, went through a near-death experience that influenced her future career aspirations.

After attending Creighton University for a semester, Banks said she transferred to K-State. She then decided to participate in a Krochet Kids International internship in Peru during her sophomore year.

“I had no idea of what I would be doing or if there would be anyone who spoke English,” Banks said. “I wanted to engage in the world, not just by going to class and the dining halls, but by going out and seeing other places.”

“I couldn’t eat, let alone have the energy to go to the store to get food,” she said.

After several months of doctors visits and returning to the U.S., Banks said she and her family were given answers. She had contracted clostridium difficile, a bacterium that causes inflammation of the colon.

“Almost everyone has come into contact with it, but I was antibiotic resistant to it,” Banks said.

Banks had months to recover and in that time, she said she discovered her passion for international relations and pre-law. She said this allowed her to have a passion that drove her to succeed academically when she finally returned to school. Now, two weeks from taking the LSAT, Banks said she is thankful for her past.

“I don’t think a lot of 20-year-olds get a near death experience, or even realize death is a high possibility,” Banks said.

Banks said she wants to work with women and nonprofits in the future. With the large amounts of people she will be able to help in the future, Banks knows one thing for sure; she said she has a reason to be alive.

Connor Corley, senior in psychology, also said he went through a difficult life event that influenced his future plans.

For two years, Corley said he studied German at K-State, but it was an event earlier in his life that led him into his passion today.

“My dad had a stroke when I was in the seventh grade,” Corley said. “It changed his cognition and he became very depressed.”

Corley watched as his father recovered after his stroke with countless therapy and recovery sessions. This impactful event in Corley’s life became the driving force in his college career as he switched his major to psychology during his junior year.

“I’m really interested in going into neuropsychology and studying trauma with the brain,” he said.

More specifically, Corley said he wants to focus on strokes or blunt force trauma from accidents and how it changes a person’s mental processes.

Corley is on track to graduate in May with a major in psychology and a minor in German, despite his change of major.

Comparable to Corley, senior Taylor Clark studied a topic he had always been interested in, architectural engineering. Clark actually started out his K-State career with the same major he has now, but it wasn’t a straight path to get there.

In his second semester at K-State, Clark said he switched his major to English.

“Then, over the summer, I did some planning and decided I didn’t really want to be a teacher,” Clark said.

Clark changed his major to chemical engineering, but it wasn’t as much design work as he had wanted. Clark then finally came back to architectural engineering with a minor in English.

“I basically took a two year circle to end up right where I was, and I’m still going to graduate on time,” Clark said.

Corley offered advice to students who are unsure what major they want to pursue.

“Look what’s going to make you happiest, something you actually want to pursue, something that brings a smile to your face when you think of your future,” Corley said. 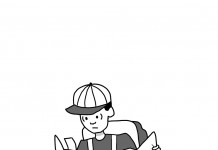