In the three sets the Jayhawks won, they defeated the Wildcats by a combined eight points, which attests to how close the entire match was. With the win, Kansas improves their record to 13-0 on the season.

“It’s hard to say if we would’ve been better at ‘blank’, then we would’ve had a better chance of winning,” Fritz said. “It’s a cumulative effect, but if we wouldn’t have got stuck in a couple positions when we were trying to side-out, that would be the first thing that stands out to me.”

Junior Wildcat outside hitter Brooke Sassin continued her good play as she had 15 kills on the night.

“She’s kind of our stabilizer,” Fritz said. “She is doing such an amazing job by attacking with purpose, which is hard to do against a big physical team.”

There wasn’t much give by either team in the first set as neither squad had larger than a three point lead. The score was tied on eight different occasions, but the Jayhawks came up with some huge points in the end of the set to take it 25-23.

Sassin led the Wildcats in kills with four in the first set while the team had 12. The Wildcats shot an even .200 hitting percentage and the Jayhawks hit .265 in the set.

K-State controlled most of the second set winning 25-19 in relatively comfortable fashion. The Cats took the lead at 10-9 and never looked back, taking advantage of the Jayhawks missing three straight serves at crucial times.

Wildcat Katie Brand had 10 assists in the second set alone, and Sassin contributed six kills in the set.

It was another competitive battle in the third, but a few costly errors late in the set cost the Cats, and they lost 22-25, putting them down 2-1.

In the third set, the Jayhawks’ biggest lead was three points, which ended up being the deciding factor. K-State led 20-19, but lost six of the next eight points to end the set going into the fourth.

The teams went back and forth in the final set before the Jayhawks took control. The score was 14-14, but the Hawks won the next eight of 10 points to take a 22-16 lead. The Wildcats clawed back, but it wasn’t enough as they lost the set 21-25 and the match three sets to one.

“We still have some work to do when it comes to offensive balance,” Fritz said. “I was pleased with our defensive effort tonight.”

Many of the points were decided after long rallies, but Fritz said they need to win more of those points.

“We needed to extend long rallies, which I think we did,” Fritz said. “But then we needed to win more of those. They are big momentum plays and we didn’t win enough long points.”

The Wildcats’ record drops to 8-5. They have lost their last four matches but will host the Baylor Bears Saturday night in Ahearn Field House at 7 p.m.

“Stay the course and continue to be invested in the process of growth,” Fritz said to her team after the match. “If we just continue to improve then the wins will also come with that. We are doing a lot of things well, and we need to keep continuing to build on those strengths.” 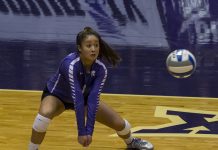