The K-State women’s tennis team heads to Norman, Oklahoma to open their fall season in what will be a three-day meet that starts today and ends on Sunday.

The K-State team, featuring a total of seven returning players from the spring and two new teammates, should be a tight matchup against a Sooners squad composed entirely of returning players.

Head coach Danielle Steinburg, however, is coming back for her second year in Manhattan with a fresh mindset, ready to make waves in the Big 12.

After ending the spring season with a loss to Baylor in the Big 12 Tournament quarterfinals, many expect the Wildcats to be playing with chips on their shoulders after a fairly successful season with a new coach.

Look for sophomore Sara Castellano to make an impact after a spring season that was cut short by injury where she went 2-0 in singles as the No. 1 seed.

Also keep an eye out for the Romanian junior Livia Cirnu to put up good numbers as she enters the fall 2015 campaign with a solid career singles record of 33-30.

Lastly, it will be interesting to see how freshman Millie Stretton fares in her first event for K-State. From Edinburgh, Scotland, Stretton was the second ranked female tennis player in her age group back home. She also made an appearance for Great Britain in the Winter Cup, a major tennis tournament in Europe.

As for the Sooners, they come in guns-a-blazing with a squad entirely composed of returning players and established head coach David Mullins entering his eighth season at Oklahoma. Oklahoma looks to be a title contender in the Big 12, and perhaps even at the national level.

It is safe to say that Mullins is good at what he does.

Since his hiring at Oklahoma in 2008, Mullins has recorded three consecutive NCAA tournament appearances, seven Big 12 position titles, two straight 18-win seasons and five ITA regional championships. He looks to add to these accolades with a quality squad.

One of Mullins’ top returning athletes is sophomore Lily Miyazaki from Tokyo, Japan. In her first year at Norman, Miyazaki notched a 15-5 record at the No. 1 singles position. She also received the honor of Co-Big 12 Freshman of the year, along with a spot on the All-Big 12 singles team.

Another player who is deserving of some respect has to be sophomore Christiana Brigante of Weston, Florida. She threw down a 20-14 overall singles record her freshman year and more specifically went 6-1 at the No. 6 position.

The Wildcats will try to spring the upset on Oklahoma, who comes into the season with an experienced team and a head coach who is one of the best in the business, today. 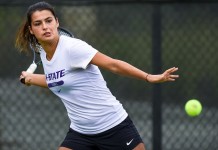 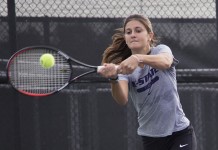