Kaiser said that taking quizzes on Canvas seems to be “more efficient” and Chowdhury said he agreed, and that Canvas is “easy to get used to.”

Kaiser said he found that classes with online quizzes and the feature that allows you to take those quizzes multiple times make Canvas and other online homework more useful and better study tools.

“I like how it shows your grades with the percentages on the side,” Chowdhury said.

When turning in assignments Chowdhury said he enjoys the feature that shows a green arrow next to the assignment as well. When it notifies him that it has been submitted, it gives him a “sigh of relief.”

Steve Smethers, associate director for the undergraduate programs in the A.Q. Miller School of Journalism and Mass Communications, said he recommends that his students find a reliable internet connection before taking tests.

“I think the big disadvantage is, what do you do when you’re already under all this pressure, and your Wi-Fi cuts out?” Smethers said. “That destroys your concentration.”

Smethers said the biggest problem he had was when he sent out a test incorrectly. He forgot to push a button that scrambles the questions for each student and cuts a pool of 100 questions down to 50 per student.

This caused panic among the students when they couldn’t finish their tests in the given 50 minutes, and it also panicked Smethers when he tried to figure out the best possible solution to this crisis.

Besides the possibility of operator error, Smethers said he finds that online involvement has been beneficial to students, and he has seen test scores rise when he gave online quizzes a week in advance. He even said that students came up and told him they felt more confident on the test after having taken the online quizzes.

Sam Mwangi, associate professor in mass communications, has been teaching online courses for seven years and said he loves it.

“One secret to a successful online class is communication,” Mwangi said.

Mwangi said he tries to create an environment in his online classes that mimics the classroom setting, encouraging peer-to-peer interaction so that the teacher isn’t the only means of information.

“We are no longer limited by resources,” Mwangi said. “Now it is possible to bring in a guest by streaming them in. It doesn’t matter where they are or where you are, as long as you are able to access that connection, we can bring them in electronically.”

All in all, online assignments, classes and involvement are now part of many classes at K-State. Some glitches can still be problematic, but the overall consensus from Mwangi, Smethers, Chowdhury and Kaiser seems to be that the online transition is a positive one. 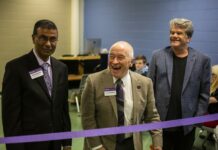