How will @TheDailyShow guests change with Trevor Noah? A look at every guest Jon Stewart had: http://t.co/Eqdcgny3Rg pic.twitter.com/2SBHuTxzbM

Replacing someone beloved, and so good at his craft, is always a little weird. It has to happen, though, and surely hot takes will follow. Reviews on the new show’s opener were somewhat mixed, but it seems largely positive.

Mixed reception for @Trevornoah as he makes his debut hosting The Daily Show http://t.co/VOz0pjEKiv pic.twitter.com/uAAy3IrzI3

Nervous but polished, Noah promised to “continue the war on bullsh*t.” http://t.co/0pKOEjoLoa

Some thoughts on Trevor Noah's smooth DAILY SHOW debut and the difference between harnessing stars and creating them. http://t.co/oohepIS0Xl

Also: Why, from a business perspective, Fallon is a better hire than Colbert and Noah makes more sense than CK. http://t.co/oohepIS0Xl

Material ranged from the Pope’s visit, to Speaker John Boehner’s leaving (some clever allusions to Stewart’s leaving too) and even the news of water found on Mars. We saw old correspondents and new, and Noah’s smile carried him through this big step in the transition.

This new correspondent was a breakout star of the Daily Show premiere: http://t.co/N0ThkFQrzs pic.twitter.com/lfMS0kpPDP

20 min. to the new The Daily Show- Just set up my series recording! #TDSWTN 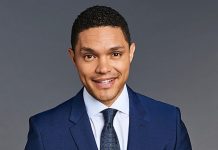