It is being reported that last week, during his trip to U.S., Pope Francis made a stop on his Washington D.C. leg to visit with Kim Davis and her husband.

Pope made his position on religious liberty cases very clear, at WH, visiting Little Sisters; why would visit w Kim Davis be unusual?

According to a statement published on Liberty Counsel, “During the meeting, Pope Francis said, ‘Thank you for your courage.’ Pope Francis also told Kim Davis, ‘Stay strong.’ He held out his hands and asked Kim to pray for him. Kim held his hands and said, ‘I will. Please pray for me,’ and the Pope said he would. The two embraced.”

This news is, unsurprisingly, causing quite the reaction.

I don't even approve of Kim Davis & her martyrdom act, yet I approve of Pope Francis meeting with her because f**k your easy narrative.

Pope continues radical ministry to the least of his children: http://t.co/LgjbvhGk3t

Once again this smiley pope shows his true colors. At heart nothing has changed in spite of the whitewash. http://t.co/0KJYArCRIO

Bright side of alleged Kim Davis meeting is liberal non-Catholics may stop pretending to care about the Pope's opinions.

Anyway, the Pope can be right about climate change and wrong about Kim Davis, because he's a scientist and not a lawyer 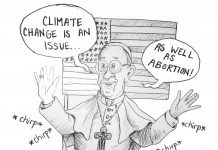 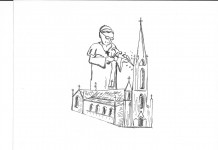 OPINION: Pope Francis is practicing what we preach

OPINION: Pope Francis is practicing what we preach