Going on canoe trips, tagging coyotes early in the mornings and tracking critically endangered black-footed ferrets in Western Kansas are just a few of the things the K-State Student Chapter of the Wildlife Society does.

Founded in 1937, the Wildlife Society has chapters all over the U.S. and at K-State. The organization brings students together through their passion for fisheries, wildlife and natural resources conservation.

“I think that one or several of the greatest things that the Wildlife Society does for Kansas State is that we bring together students who are interested in wildlife, and by doing so they make valuable connections and life long friends,” Alexandria McChesney, vice president of the Wildlife Society and senior in fisheries, wildlife and conservation biology, said.

According to the official Wildlife Society website, there are nearly 10,000 national members that include scientists, students and educators that all support the mission “To inspire, empower, and enable wildlife professionals to sustain wildlife populations and habitats through science-based management and conservation.”

To be able to achieve that idea, K-State Wildlife Society, which currently consists of roughly 30-40 K-State students, participates in several activities throughout the year.

“Every October we go out to Western Kansas … and do a black-footed ferret survey, which is basically all night using spotlights and driving around on the prairie and trying to find this green ‘eye shine,'” Emily Ferlemann, president of Wildlife Society and senior in biology, said. “When you flash a light in their eyes, their eyes shine green, and we basically trap them and give them a full vet exam and re-release them.”

“They’re a critically endangered species and were thought to be extinct for several years,” Ferlemann said. “This is a reintroduction program we’re a part of.”

“I’ve always loved wildlife and my major is wildlife biology, so it was a perfect fit because I got to experience things that would help me in my career outside of the classroom,” said Richard Rogers, vice president of the fisheries portion of the Wildlife Society and sophomore in fisheries, wildlife and conservation biology. “And, I get to have a lot of fun while doing it as well.”

The society frequently hosts speakers during meetings in order to gain an expert’s insight on a number of wildlife topics.

“It’s already started helping my career,” Ferlemann said. “I got involved in Wildlife Society when I was a freshman and with the workshops we do, a lot of these you end up walking around the prairie with these people who are professionals.”

Ferlemann said that part of this process is spending time with the society through the activities.

“For the ferret survey, you work in the cars, driving around the prairie in the dark all night, so you end up really getting to know these people,” Ferlemann said. “But I’ve made some really great friends with people from state departments, a variety of people from nature centers, the vets … who do the vet exams … and zoos … networking has already helped me a lot.” 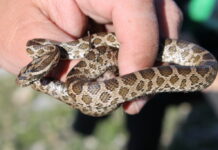